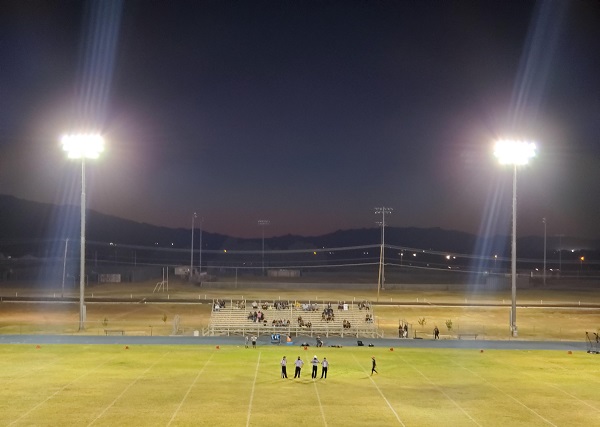 SAFFORD — “An ugly win is still a win,” said Safford Head Coach John O’Mera follwing his teams 14-12 win over Round Valley on Friday night. His team took a 14-0 before having to stop an Elk 2-point conversion with 1:36 left in the game to seal the win.

It Safford’s first ever win over the Elks in their short 4 game history.

The first half consisted of little offense, some good defense and mostly penalty flags. Safford’s offense struggled to find any rhythm as they adjusted to O’Mera’s triple option style running attack and never had a scoring chance.

The Round Valley offense seemed to have a hard time with the size and strength of the Bulldog defensive front and never threatened to score.

The team’s hit the halftime break with a 0-0 score.

Safford opened the scoring with 6:54 remaining in the 3rd quarter when Linebacker Christian Smith intercepted an Owen Young pass and returned it 22 yards for the touchdown.

The Bulldog offense gained momentum heading into the 4th quarter and capped of a drive with a 17 yard CJ Scrivner score to extend their lead to 14-0.

A Bulldog fumble set up a 1 yard Young to Rylee Hamblin pass and catch to get the Elks on the board with 6:42 remaining in the game. The Elks decided not to onside kick after the score and it paid off as the ‘Dogs went 3 and out quickly and punted back to Round Valley.

The Elks spread out their offense with 5 wide receivers and threw short passes to get into Bulldog territory. After a holding penalty on 3rd down the Elks faced 4th and 32. Young fired a deep pass down the middle to Rowdy Rivera for 35 yards to set up a 22 yard touchdown pass to Rivera on the next play.

The Bulldog defense intercepted the 2-point conversion try and held on for the win.

“We are starting a lot of guys that have never played varsity football before,” said O’Mera after the game. “When you do that you are going to have mistakes.”

The Bulldogs fumbled 5 times and had nearly 100 yards in penalties.