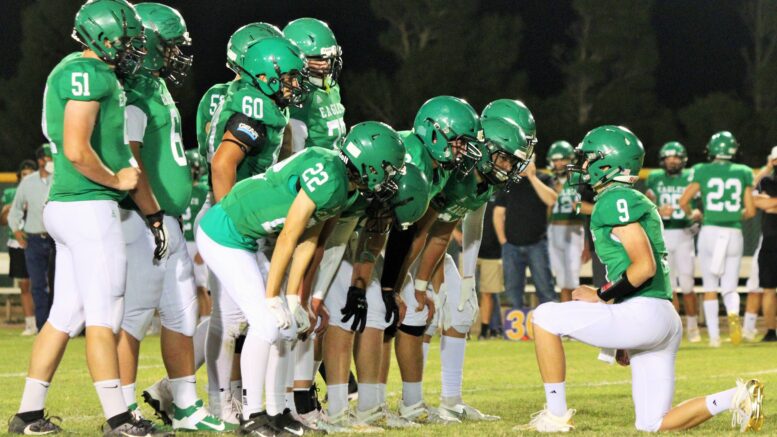 Thatcher Eagles huddle up on offense in the first half against Snowflake. Photo by Ricky Crisp

THATCHER — For a half of football, Thatcher dominated Snowflake en route to a 13-0 halftime lead.

Snowflake rallied in the second half to beat Thatcher 17-13.

“We are excited to be here to play, and we know that Thatcher is a great program, and we expect to be in a great ball game tonight,” said Solomon.

Thatcher’s defense and special teams got the party started early in the first quarter when Brayden Oliver blocked Snowflake’s punt, leading to an 18- yard touchdown run by Michael McBride.

McBride had two rushing touchdowns for the evening.

Snowflake had no answers for Thatcher in the first half, as Thatcher’s defense only allowed two first downs.

The Eagles were dominating on both sides of the ball, forcing the Lobos to eat a 13-0 lead heading into halftime.

A different looking Lobos football team came out in the second half, forcing a three and out for the Eagles, leading to Caden Cantrell connecting with Noah Baum for a three-yard touchdown reception.

Snowflake’s Baum scored his second touchdown on the next possession when he blocked Thatcher’s punt and recovered it in the end zone, giving Snowflake a 14-13 lead in the third quarter.

Thatcher had lost their momentum and couldn’t seem to get anything cooking and were looking for answers on both sides of the ball.

The Lobos’ Sam Crockett kicked a 37-yard field goal to give his team a 17-13 lead with seven minutes remaining in the ball game.

Thatcher was able to chew up the clock and bring the ball downfield but could not convert on 4th and 4 turning the ball over on downs on their 18-yard line.

“In the second-half Snowflake had big energy and were unable to match it,” said Thatcher’s head coach Dan Jones. “We are going to figure out what went wrong and work on fixing those issues, we had a lot of good stuff tonight, but we got to finish.”