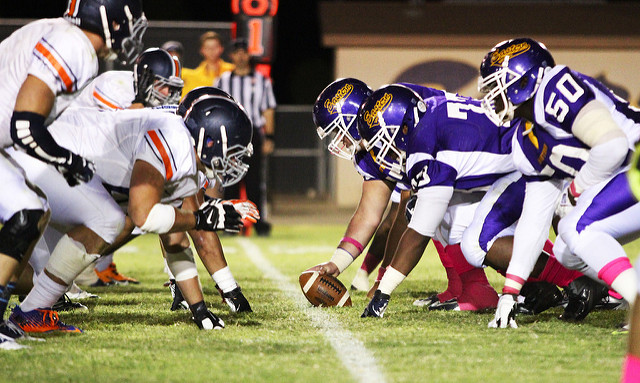 Eastern Arizona College leaned on its power run game Saturday night and combined with a staunch defense upset #5 Snow College 24-17 to win the first Western States Football League in program history. A program that dates back to 1920.

The Gila Monsters tallied a whopping 339 yards rushing while attempting only one pass, an incompletion in the first quarter. Sophomore Wilbur Cooper finished with 202 yards and two scores. His first came with 6:08 to play in the first half as he broke loose from 87 yards and went to the house untouched to give EAC a 14-3 lead at halftime.  He also put up the first Gila Monsters points of the 3rd quarter when he scampered in from 19 yards out with 6:25 left in the first quarter. That capped a nearly 9 minute drive for the Monsters and gave them a commanding 21-3 lead.

Snow College wouldn’t go away though. They added their first touchdown with 4:12 left in the 3rd quarter as power running back Shammah Luani scored from 3 yards out to cut the EAC lead to 21-10. Eastern added a 29 yard FG from Demitri Fotinos and extended the lead back to 24-10 with 12 minutes left in the game.

The Badgers put together a big 4th quarter drive that was capped by a Braxton Kerr 25 yard touchdown pass to Jalen Powell to cut the lead down to 7 with 5:30 remaining. The Gila Monsters had to punt the ball back to the Badgers with just over two minutes left and it set up an exciting finish.

Snow used their hurry up spread offense to put them in position for a game winning drive. On a 3rd down play at the EAC 40 yard line, Kerr threw a pass towards the Badger sideline but Monster defensive back Quandre Mosley cut off the route and picked off the pass giving EAC the ball at their own 30 yard line with just 52 seconds remaining. It should of been a game ending interception except the Badgers had all 3 timeouts remaining forcing the Monster to punt the ball back after 3 kneel downs.

The Badgers speedy returner, Powell, returned the punt all the way to the EAC 30 yard line with 14.5 seconds left. Snow had life and a second chance. That was short lived however. On the next snap Eastern defensive end Micah Stallworth pressured Kerr and forced a fumble that the Monsters recovered to preserve the victory.

The Eastern defense was outstanding. They held the Badgers to a season low 17 points, a full 20 points below their season average.

“We made it a little too exciting at the end”, said EAC Head Coach John O’Mera.” I’m proud of this team for not giving up and keeping their composure”, he added.

The win nearly guarantees a Bowl Game invitation for the WSFL Champions. O’Mera mentioned that he has been contacted by Bowl Game personnel in Mississippi, Texas, Oklahoma and Iowa. ” Now we wait and see who calls”, O’Mera added.

If indeed this was the final game in EAC football history. It was a marvelous way to go out. The 2018 WSFL Champions.