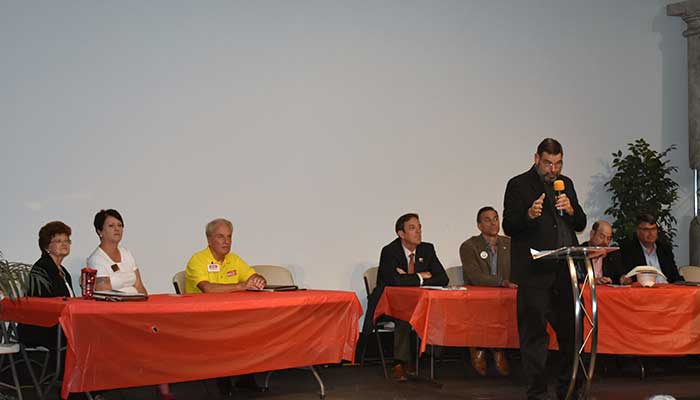 Republican candidates for a variety of political offices gathered at the Victory Fellowship Theater Wednesday night to present a brief introduction of themselves and an overview of their candidacy. The candidates were introduced by David Morse, then each given five minutes to talk about their views and objectives. The first candidate to address the audience was Ken Bennett, who is running for governor against Republican incumbent, Doug Ducey.

Bennett told the crowd that some people ask him why he is running against a sitting Republican Governor. Bennett’s answer to the question is that the truth matters. Bennett says that he doesn’t believe the public is being told the truth about the state budget. “We’ve been told for the last four years that the state’s budgets were balanced and yet the total debt of the state of Arizona has grown by $1 billion over that same four years,” Bennett said.

Bennett cited increased vehicle taxes in the form of fees as a way the current administration is using ‘accounting tricks and gimmicks’ to fool the public. Bennett said that vehicle fees will rise by $92 million next year and $182 million the following year.

Bennett pointed out that the public was told there was a 20% raise passed for teachers, but the reality is that the legislature did not give teachers a raise, they appropriated more money for the schools, then the school boards of each district allocate raises. Bennett referred to Prop 123 that Governor Ducey championed, that was supposed to put $350 million a year into the school, when in reality very little of it may its way into the schools.

Bennett told the group that when the senate had the opportunity to vote down Obamacare, Senator McCain said he would vote the way the governor wanted him to vote, but he did not vote to repeal Obamacare. Bennett said he believes that both Senator John McCain and Governor Ducey failed the state in this opportunity.

Bennett ended his presentation telling the group that he is running under the clean elections program. “Instead of taking large contributions from individuals who might think that I owe them a favor or something, I’m running under clean elections where I accept five dollar contributions from regular Arizonans. We turn all of those into the State of Arizona and they provide almost $900,000 to run the campaign. And then I’m working for you, the people of Arizona instead of people who gave me large contributions.”

Rodney Glassman is running for Corporation Commission. He has a PhD in Arid Land Resource Science and an Environmental Law degree from the University of Arizona. Mr. Glassman was not able to attend the meeting because he is a Major in the Air Force JAG reserve and has been deployed. Glassman was represented by Pima School Superintendent, Sean Rickert.

“Rodney Glassman is an Eagle Scout, a husband, a father, an attorney, an Air Force officer,” Rickert told the group. “Rodney is running on a platform of restoring integrity to the commission by advocating for the adoption of the Arizona Code of Judicial Conduct. That’s the same code of conduct that’s followed by the Arizona Supreme Court.”

Rickert pointed out that Glassman’s experience and education make him uniquely qualified to handled the issues that come before the commission. One issue that Glassman will be championing is Arizona’s water future.

Kelly Ward is running for the U.S. Senate. She was unable to attend and was represented by Bill Minard. Minard explained that Dr. Ward was in Washington D.C. filming CRTV interview. Minard described Ward as a constitutional conservative. He said that he would like to see the candidates debate the issues, but the state GOP is refusing to schedule debates. He encouraged people to contact the GOP and ask them to schedule a debate.

Minard said he supports Kelly Ward because she is a true constitutional conservative. “The best indicator of future behavior is past behavior,” he said. “Take a look at Dr. Ward’s voting record in the Senate. She ran conservative and she voted conservative.”

Minard said that Ward has the ability to get bipartisan support to get conservative bills passed. “The last year she was in the Senate,” he said, “She had 19 bills signed into law and she sponsored another 18.”

Steve Smith is a candidate for the U.S. House of Representatives. He has a BA in Marketing and Business Law from Michigan State University. Smith was the first Republican elected to the state legislature from his district in 100 years.

Smith started his presentation saying, “This is the day the Lord has made, right? Let us rejoice and be glad in it because when we can do this together, that’s a great day.”

Smith said that after the events of September 11, 2001, he decided it was time to do something different. “I had always been in business, but for some reason God led me into politics. I don’t know why, I had never ran, never done it before, but I said, alright we’re going to go do this.”

Smith said he beat the odds when he ran against a Democrat for the state legislature. He said that since he got to the state senate he’s been ranked number one on all the top scorecards, such as the American Conservative Union, the Goldwater Institute, Americans for Prosperity. He said he had an A+ rating by the NRA. He said he had a 100% pro-life and pro-family voting record. He said he was the author on some of the toughest pro-life legislation in the country.

Smith told the group that he’s running for U.S. Representative because he thinks it’s a platform that he thinks he can serve on a bigger level. He said that Incumbent, Tom O’Halleran is ranked the number one most vulnerable Democrat in Congress.

David Gowan is running for state senate. He has a BA in Secondary Education Social Studies from the University of Arizona. He resides in Cochise County. He’s a former speaker of the House in the Arizona House of Representatives.

Gowan said that when he was first elected to the state legislature, the state budget was set at $10.4 billion, but the state was only bringing in $6.4 billion. Gowan said that his last year in the state house they balanced the budget and cut $1.1 billion of government out. Gowan said that experience and leadership matter and that ‘s what he will bring to the Senate, if elected.

Lori Kirkpatrick is a candidate for the state Senate. She’s a school teacher who resides in Cochise County. She also owns a business in Tombstone. This is Kirkpatrick’s first run for political office. Kirkpatrick is pro-military. Her husband is retired military and two of her children currently serve. She told the group that she is a constitutional conservative. She said that, as a business owner, she knows what our communities need to grow and prosper.

“It’s about we the people,” she said. “Our country was founded on the premise that we, the people – our individualities, our differences – can bind together, make us strong. That ‘s where our power is.”

She said that our problems are in our communities and that’s where we’re going to find the solutions. “We need to hold our elected officials responsible for their actions and what they’re doing. They need to remember that every dime that comes into the government to spend is a dime that comes out of a pocket that supports a family.”

Gail Griffin has term-limited out in the state senate and is running for state representative. Griffin handed out copies of the U.S. Constitution as she met with attendees. Griffin talked about the water issues our district has been facing.

“This past year there was a movement to take water rights and property rights and we were successful in stopping it,” she said. “What we have done is, instead of passing water legislation, we decided that we would go out to the public, and we have been to seven or eight locations. We’ve been here in Safford.” Griffin said she wants to continue fighting for water rights in the House of Representatives.

She told the group that she believes in less government, lower taxes, personal responsibility and the free enterprise system.

She also pointed out that only 13 % of Arizona land is owned privately. She said most of the land in the state is owned by the BLM, the Forest Service, Military bases, Tribal lands, and State Trust lands. The 13 % in private hands is the tax base that funds things like public schools.

Referencing the comments made by Ken Bennett about teacher salaries, Griffin said, “It was mentioned that we did not give teachers salaries, because we identified, in fact put a message in the bill, that those monies that we allocated for teacher’s salaries, that the school districts were to determine what was to go toward teacher’s salaries.”

Griffin pointed out that other states east of us have more land in private hands and therefore have a greater tax base and more revenue to allocate to public schools.