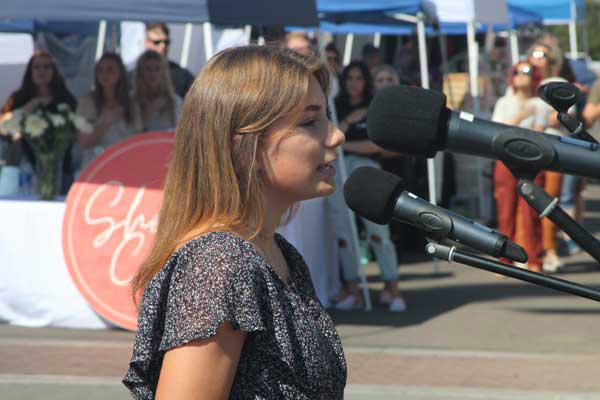 SAFFORD — The 20th anniversary of the terrorist attacks of Sept. 11, 2001, was remembered Saturday by a pair of events.

Eastern Arizona College conducted its annual stair climb of the bleachers at John Mickelson Field, with participants walking 2,071 stairs to duplicate the number of stairs first responders climbed to rescue victims in the towers of the World Trade Center.

The other was put on by Code 4 First Aid and Hometown Market on Safford’s Main Street.

Under a giant American flag held aloft by the Safford Fire Department’s ladder truck, residents heard patriotic music — including the national anthem by Kaylie Windsor — and a speech by Safford Mayor Jason Kouts.

Following the patriotic program, residents shopped an expanded Hometown Market, with home-based businesses in both The Venue and in booths on Main Street.