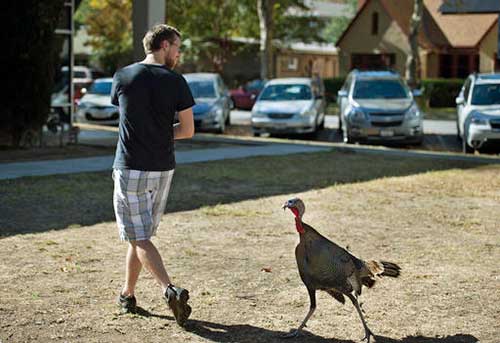 DAVIS, Calif. (AP) — Leaders of a California college town are working to relocate turkeys that have been harassing people on the streets.

The Sacramento Bee reports (http://bit.ly/2eeuM4l ) that the Davis City Council voted this week to approve a wild turkey management plan that includes trapping and relocating many of the birds and possibly killing some of the more aggressive ones. It also called for an ordinance prohibiting people from feeding the turkeys.

Davis residents are fond of urban wildlife. They built a tunnel for toads and protected jackrabbits from construction, but the well-known turkeys wandering the streets are too much.

Police Chief Darren Pytel says his department has fielded calls from people accosted by turkeys, including a man who was pinned against the wall of a bank by a bird.

Information from: The Sacramento Bee, http://www.sacbee.com