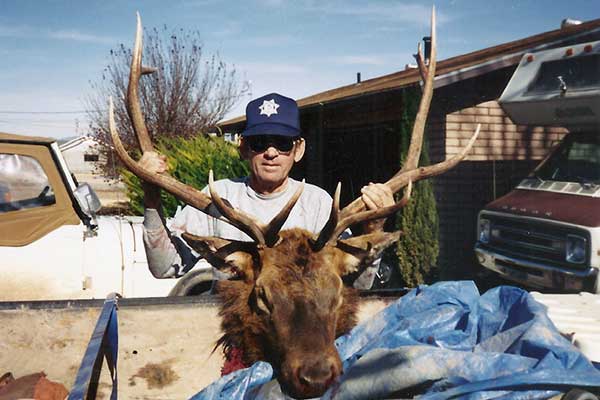 Raymond George Hetmer, 83 of Thatcher, passed away October 12, 2019.  He began his life on December 20, 1935 born to Joseph and Antonia Hetmer in Seagoville, TX as one of five brothers.

He joined the United States Marine Corp. at 17 and served during the Korean Conflict stationed in Japan. After discharge while living in Chula Vista, CA, he met his true love Bobbie Wimberley and they wed on June 13, 1959.  Four children were born to this union Christina, Lance, Raymond Jr., and Tonnie.

George supported his family working as a supervisor in the iron worker industry. If you have ever traveled in Southern California, you have driven across bridges he was responsible for building.  While raising his family he played many jokes on family and friends such as teaching “no” is spelled “lop”, weighing down his lunch pail with re-bar so it could barely be lifted and sending a few adults on snipe hunts.

Aa an avid outdoorsman, after retiring to Thatcher, AZ, the beloved grandfather taught his grandchildren hunting, fishing, trapping and a few gardening skills.  His unique views on many subjects lead to stories of Wild Burp bones in the desert, the story of Falling Rocks a young Indian brave, how to make a potato gun and even the Carnation milk song was taught. He continued to pick on adults with his trickery and fun pranks as well. Undoubtably, if George was there you were having fun. If, however, you ever needed him, he was just a phone call away and always said, “I’ll be right there.”

He is survived by is wife Bobbie Hetmer, his daughter Christina Meinert married to Gary, his son Lance Hetmer married to Teresa; grandchildren Shannon Meinert, Kyle Meinert, Breanna Meinert, Ryan Duncan married to Katie, Hailey Duncan-Bailey married to Phil, Christiaan Mitchell married to Adair; great grandchildren Kosima, Connor, Moe and, Emma, in addition to many beloved nieces and nephews, and friends. We all will miss such a great and loved man but know his wisdom and love will always be with us.

He is preceded in death by his parents; three brothers, Gene, Bob and Jim; two of is children Raymond, Jr. and Tonnie.

A viewing will be held on Friday, October 18, 2019 at 10:00 a.m. at the McDougal’s Caldwell Funeral Chapel followed by the graveside service at the Pima Cemetery beginning at 12 noon with Chaplain Ken Roshon presiding.