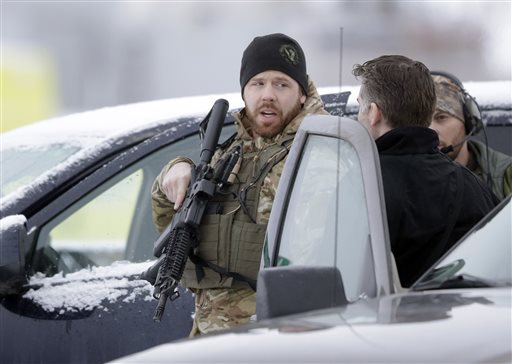 Members of the FBI stand guard at the Burns Municipal Airport, Sunday, Jan. 10, 2016, in Burns, Ore. A small, armed group has been occupying a remote national wildlife refuge in Oregon since a week earlier to protest federal land use policies. (AP Photo/Rick Bowmer)

PORTLAND, Ore. (AP) — The armed activists occupying a national wildlife refuge in southeastern Oregon said Tuesday that they plan to hold a community meeting this week to explain themselves and inform residents when they will leave.

A member of the anti-government group told reporters that the meeting will be held Friday evening in Burns, 30 miles from the Malheur National Wildlife Refuge, The Oregonian newspaper reported (http://bit.ly/1RK65f6).

Arizona rancher Robert “LaVoy” Finicum said the location has yet to be determined. He said “there should be a dialogue” but declined to give any specifics about the group’s exit plans.

The small group is under pressure from many locals to end the occupation that began Jan. 2. The activists are there to oppose federal land-management policies.

Ammon Bundy, the group’s leader, has previously said the group would not leave until a plan was in place to turn over federal lands to local authorities. They also want the release of Dwight and Steven Hammond, father-and-son ranchers convicted of arson who returned to prison last week to serve longer sentences.

The Hammonds’ case set off the occupation, but they have distanced themselves from the activists.

Federal, state and local law enforcement are monitoring the occupation but have not taken action. Officials with the Harney County Joint Information Center declined to comment because of the ongoing investigation.

The group tore down a stretch of government-erected fence near the refuge Monday to give a local rancher access to the range. The armed men also have accessed government files and equipment.

At a community meeting that hundreds attended that night, Harney County residents repeatedly asked the group to leave. They included a Burns High School freshman, who got a standing ovation from the crowd.

“And I just want them to go home so I can feel safe and I can feel like it is home again,” 15-year-old Ashlie Presley said with tears in her eyes, referring to the armed men. “I shouldn’t have to be scared in my own hometown.”

But some residents also said they share the activists’ frustration with the federal government — though they don’t agree with their tactics.

That same frustration was also at the heart of a message about the refuge occupation delivered by Republican Oregon Congressman Greg Walden on the U.S. House floor last week. The speech by Walden, whose district includes Harney County, has gone viral online.

Walden told the AP on Monday that while he does not condone the occupation, the armed men “have elevated the knowledge of frustration people feel in this high desert county.”

Walden said that frustration stems from constant pressure by environmental groups who want to leave public land untouched and from the arrogance exhibited by some federal government bureaucrats who don’t follow the law and disregard the opinions of residents in the rural region.