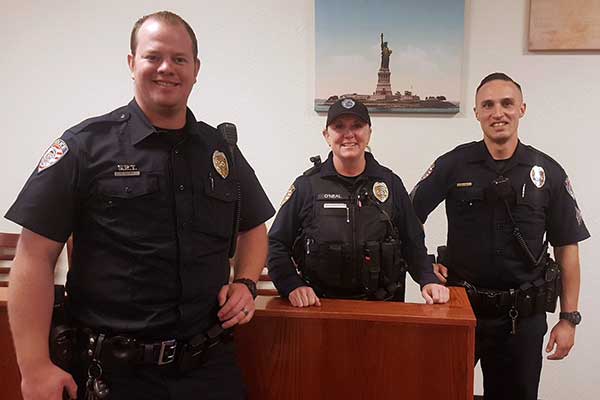 Law enforcement personnel put their lives on the line every day, working to keep our communities safe. They patrol our streets, investigate crimes, arrest criminals and sometimes, they save innocent lives all in the line of duty.

Recently, three Safford police officers responded to an emergency call involving a 10-month-old infant who had stopped breathing. Sergeant Randy Loya and officers Sherri O’Neal and Tyler Cluff were the first to respond. While the ambulance was en route the officers quickly assessed the situation and made the decision to transport the infant to Mount Graham Regional Medical Center in a patrol car. Officer Cluff drove while Officer O’Neal gave the baby chest compressions and Sergeant Loya handled radio communications.

The story begins with Chad and Julie Brown. The Browns have two adult children and are now starting over again with two special needs girls. They have a 5-year-old daughter who they adopted from China four years ago. She had a heart condition that was repaired shortly after coming home. Now they have Brielyn, a 10-month-old, who also has a heart condition. 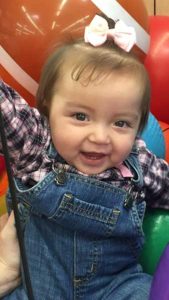 On the morning of January 25, 2018, Julie Brown noticed she had written “9:30” on her calendar. She didn’t know why it was on the calendar but decided that she should be ready in case somebody stopped by the house. Her 10-month-old daughter, Brielyn woke up from a nap just as Julie finished getting ready. She picked the baby up out of her bed and placed her on the floor to play with some little stuffed animals while she ironed. For some reason, Julie stopped ironing and knelt down with Brielyn and played a video on her mobile phone to help her learn to commando crawl. When the 2-minute video ended, the baby rolled over and let out a little sound. Julie gently laid her on her back. She thought Brielyn had pulled a muscle in her neck because she grabbed the right side of her head, scrunched up her face, and let out another little cry. Julie picked her up and held her in her arms, thinking the baby might be on the verge of a seizure. Brielyn had a history of Epilepsy but it was thought to be under control. It turns out that Brielyn was going into cardiac arrest. Her eyes rolled up in the back of her head and she turned blue.

Julie believes that divine intervention played a roll in how the events played out. “Here God got me up at 9:30 and got me dressed without a reason to be dressed. He put that baby in my arms, and I was down on the floor with her, helping her crawl, at a moment when I normally would have been ironing,” she said. 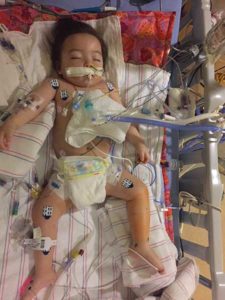 Julie recalls having a feeling of great peace, knowing that everything would be all right. With her cell phone in hand, she dialed 911. In less than a minute after placing the call, Officer Sherri O’Neal walked through Julie’s door. She was followed by Sergeant Randy Loya. Officer O’Neal began CPR on the baby. Officer Tyler Cluff arrived and the decision was made to transport the baby to the emergency room instead of waiting for an ambulance.

Julie grabbed her shoes and jumped in her car to follow the police to the hospital. Her husband, Chad, had been out javelina hunting that morning. Normally, he would not be in cell phone range. She wondered how she was going to let him know what had happened. Just as she picked up her phone to call, her phone lit up. It was Chad calling. He had just shot a javelina and had climbed to the top of a hill to call her. Twenty minutes later, Chad was at the hospital.

Julie described the scene at the emergency room: “We were there watching them all work on her. There were a lot of people around her and one of them was giving her chest compressions. They had to shock her twice, but they didn’t give up.”

About thirty minutes later the emergency room team finally got her heart started and everyone in the room cheered.

Knowing that Brielyn would be there for an extended period of time, the Browns took their 5-year-old daughter out of school in Safford and made arrangements for her to stay with their adult daughter in Tucson. They were having trouble getting her enrolled in school but finally a friend referred them to a Christian school, which Julie considers an answer to prayer. “Now she goes to school everyday with 10 little kids who pray for her baby sister,” Julie said. “When everything seems to be going wrong, it’s nice to have something go right.” 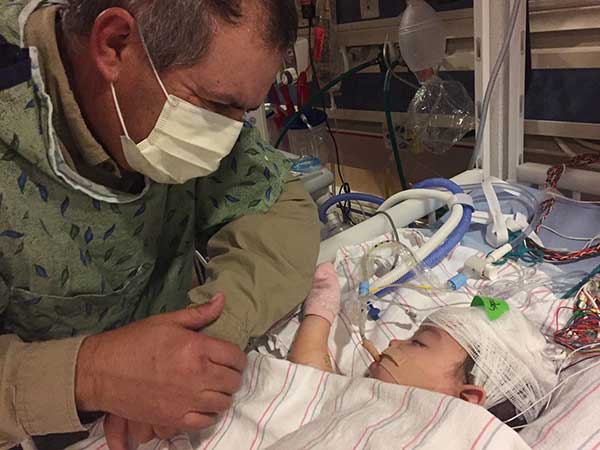 The doctors at Phoenix Children’s Hospital ran a series of tests and concluded that there was not much they could do for Brielyn.  They had considered implanting an ICD (Implantable Carioverter Defibrillator) to maintain heart rate and rhythm but because of her weakened condition they didn’t think it would help. She was having what the doctors considered potentially lethal heart arrhythmias.

Over the next several weeks, however, Brielyn’s condition improved dramatically. She started responded to medication. She could breathe on her own without a ventilator. She regained all of her cognitive skills, and her eyesight had improved greatly.  Her personality started coming through, and she seemed to be returning to normal. 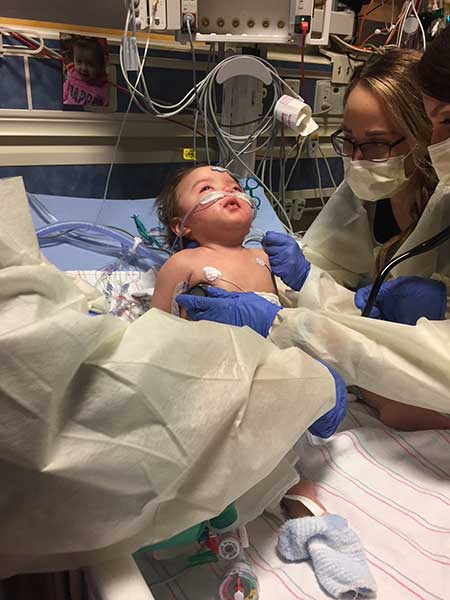 Peeking her eyes open in response to mommy’s voice.

Julie wanted to get in touch with the police officers who rescued her baby. She wanted to let them know Brielyn had survived and was doing very well, but she didn’t know how to make contact. One day, out of the blue, Julie got a phone call. The person on the other end said that he had missed a call from her number. The caller was Graham County Sheriff, P.J. Allred. However, Julie had no record of having called Sheriff Allred. Julie asked him if he could contact the police officers who saved her baby and let them know that the baby was alive and doing well.

Before the Sheriff had a chance to relay the message, Julie received a call from Officer Sherri O’Neal. Officer O’Neal said that Julie had been on her mind for days and wanted to know how the baby was doing.

Julie believes the circumstances surrounding her baby are nothing short of a miracle. “She was on a ventilator for a week and a half,” She said. “They didn’t think she would be able to breathe on her own. Now she’s in there cooing and talking and turning the pages of the book 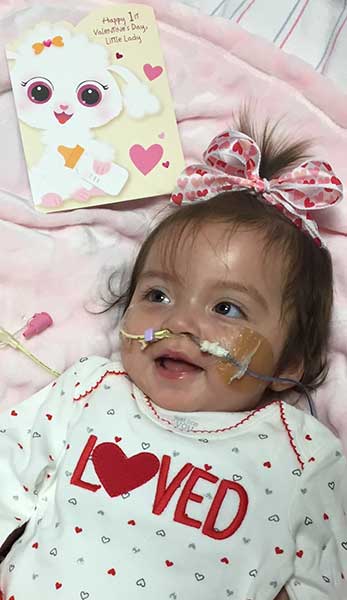 she got for Valentine’s Day.”

Julie said that the quick actions of O’Neal, Loya and Cluff not only saved her baby’s life, but also saved her brain. Because they acted so quickly and got her to the hospital, the baby has a chance at a future. Julie also praised the efforts of the emergency room staff. While the quick actions of the police officers kept the baby alive while en route to the hospital, the emergency room doctors and nurses got her breathing on her own again. It took about 30 minutes to resuscitate her. Once she was stable, they sent her on to a children’s hospital for further treatment.

Safford Police Chief, Joe Brugman said that Officer O’Neal arrived in less than a minute and the officers were en route to the hospital within 5 minutes. “Safford Police Officers Cluff, O’Neal and Sergeant Loya performed exceptionally – making the correct decision to transport the child, knowing that a life was in the balance,” Brugman said.

“She died in my arms that morning, at 11:11 on January 25th. Died! And He (God) still brought her back whole, if not better than whole,” Julie said.

Julie considers the police officers who responded to her emergency as angels. “She’s alive because of Sherri,” she said. But God was our first responder. He put her in my lap. He put me on the floor within seconds, with her between my knees, practicing her crawling or else I wouldn’t have even seen what was happening. I wouldn’t have noticed anything was wrong because it was so subtle.”

Brielyn is now scheduled for an ICD, the implanted defibrillator that will help regulate her heart. Because of the quick action of 3 dedicated police officers, the determined emergency room team at Mount Graham Regional Medical Center and the subsequent prayers of friends, family and total strangers, baby Brielyn has a new outlook on life.

“Something so tragic brought her to such a great place,” Julie said. “All her medical needs are being addressed. There’s peace of mind knowing that the ICD will prevent this from happening again.”