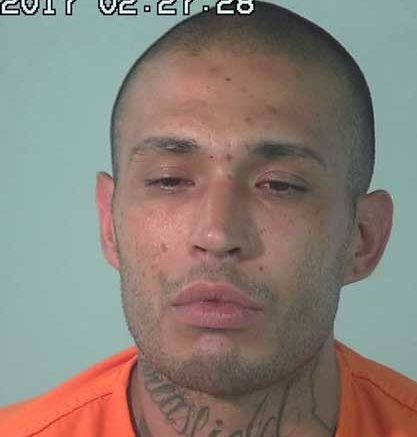 GRAHAM COUNTY – Authorities are searching for a man and an accomplice who they believe are responsible for the shooting of a man off State Route 366 (Swift Trail) on Monday night.

Police are looking for Manuel Ramon Campos, 36, of Safford. According to a relative of the victim, Campos allegedly shot Gary Don Hess, 48, in the neck with some sort of buckshot or birdshot out of a .12-gauge shotgun.

Deputies were dispatched to a residence off State Route 366 at about 6:18 p.m. and discovered the wounded Hess. He was taken to Mt. Graham Regional Medical Center and eventually flown to Banner-University Medical Center Tucson for treatment after “being stabilized” for transport, according to Graham County Undersheriff Jeff McCormies.

“He (Hess) was alert and he was talking to the investigators,” McCormies said.

As of Tuesday morning, Hess was listed as being in serious condition, according to a UMC spokesperson.

In addition to Campos, police are also searching for a second man who may have been with him during the time of the shooting. According to McCormies, the shot went through the door before striking Hess. County Dispatch notes list that Campos is a neighbor to the victim. Campos was previously found guilty of aggravated assault and burglary in 2010, and disorderly conduct with a deadly weapon in 2015.

Anyone with information about the case or Campos’ whereabouts is urged to call the Sheriff’s Office at 928-428-3141. Campos is believed to be armed and dangerous and anyone who sees him should call 911.