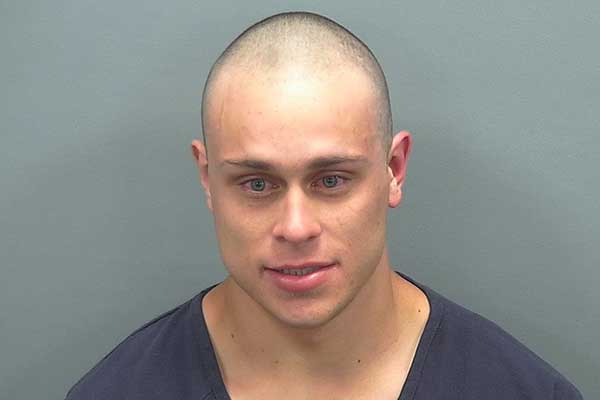 A Safford police officer was at a restaurant in Safford last Saturday evening at approximately 7:00 p.m., when an employee approached him and said that there was a man in the parking lot who might have stolen something from the business next door. The employee pointed to a man with a shaved head and a white T-shirt who was getting into a car with two women. The employee pointed out two patio folding chairs and said that the man had taken them from somewhere nearby, possibly the business next door. The man, later identified as Daniel Osornio, left them behind when someone confronted him about them.

The officer approached Osornio and said that he needed to speak with him about the chairs. A woman with Osornio said the stuff came from the business next door. The woman said that she was with Osornio and had seen him inside the business. The woman handed the officer a garbage bag with makeup and toiletries inside. According to the police report, Osornio was posturing aggressively and was not communicating with the officer. The officer requested another unit and had Osornio take a seat in the car. The woman tried to calm Osornio down and leave but the officer told her that he needed to speak with Osornio.

Osornio appeared intoxicated and said he ‘just took a couple beers.’ He pulled a beer bottle out of his pant leg and then reached toward his waistband. The officer stopped him and placed him in handcuffs. The officer told Osornio that he wanted to talk to him about breaking in next door. The officer asked him where the beers came from and Osornio said, “I jacked them.” He would not say where he got them.

Osornio was in possess of a prescription pill bottle for Trazadone with somebody else’s name on the bottle. Osornio said that he had not taken any of the pills yet. The officer asked how Osornio got into the building and he replied that it was unlocked. The officer asked if he got the pill bottle from the building and he said, “no.” Osornio admitted that he had taken the items in the bag. The officer searched Osornio and found a box cutter, some eye drops and a cell phone. He was then placed in the back seat of a patrol vehicle.

The owner of the building was contacted and came down to look at the property the officer had recovered. She identified the items in the trash bag as hers and the items were valued at $647. She said that the patio chairs had been on the back porch. She told authorities that Osornio did not have permission to be inside the building or take any property from the building. The items were returned to the victim.

Osornio was transported to the Graham County Jail and booked for Burglary-No Forced Entry, Criminal Trespass and Theft. At the jail, Osornio reportedly displayed mood swings and was not compliant with Jail staff’s requests numerous times. While changing into jail clothing, Osornio became aggressive toward staff members and was pepper sprayed and placed into a restraint chair.