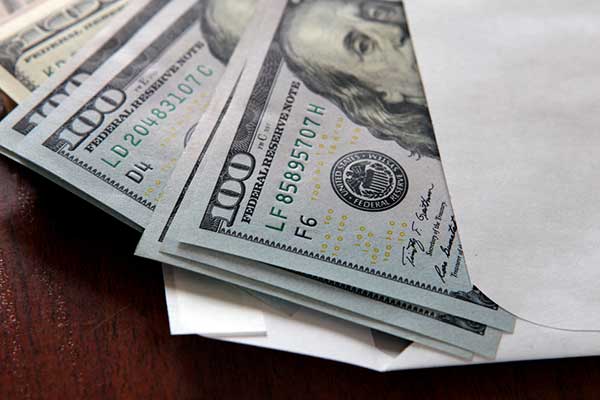 SAFFORD – On Thursday, police officers from three departments worked together to locate and return almost $1400 to a woman who dropped it earlier in the day in a convenience store in Safford.

When a Safford officer arrived at the convenience store on Thatcher Boulevard, the female victim reported that she had lost $1400 inside just minutes prior to the officer’s arrival. According to the police report she claimed that the store’s staff had found the person on the surveillance video who had picked her money up. However, they could not share this information without an officer present.

The investigator met with the staff to view the surveillance footage where it could be seen that after the victim paid for her items from an envelope filled with cash, she placed it inside her back pocket. As she was leaving the store, the envelope is seen falling out of her pocket onto the floor just inside the doorway. According to the report, the video also showed that the man behind the victim in line saw the envelope drop, then paused, moved to pay for his items and then proceeded to pick up the envelope on his way out the door. Looking at the time stamp on the video, it appeared that less than a minute had passed from when the victim dropped the envelope to when the man picked it up. The victim said that she still would have been in the parking lot, but no attempt to return it was made.

Store employees were able to provide a first name, and said that they thought the man was from Clifton or Morenci. The Safford officer contacted a detective at the Greenlee County Attorney’s office and sent a photo of the man where he was provided the man’s full name. The man’s address was then obtained through the Department of Motor Vehicle records, which showed an address in Pima.

A Pima officer met with the investigator to locate the man’s address where they made contact with his sister. She told the officers that he had just left and was headed to Morenci to visit friends. The sister called her brother and when he answered the Safford police officer spoke to him and informed him that he needed to retrieve the money he had taken from the store. The man agreed to meet a Greenlee deputy at Bashas in Morenci. After the money was returned, the Safford officer met the Greenlee County deputy at the county line. The deputy told the officer that the man said he had used $15 for gas and gave $5 to a friend.

The officer met the victim at the Safford Police Department to return the money. The police report indicates that officers will meet with the man at a later date.