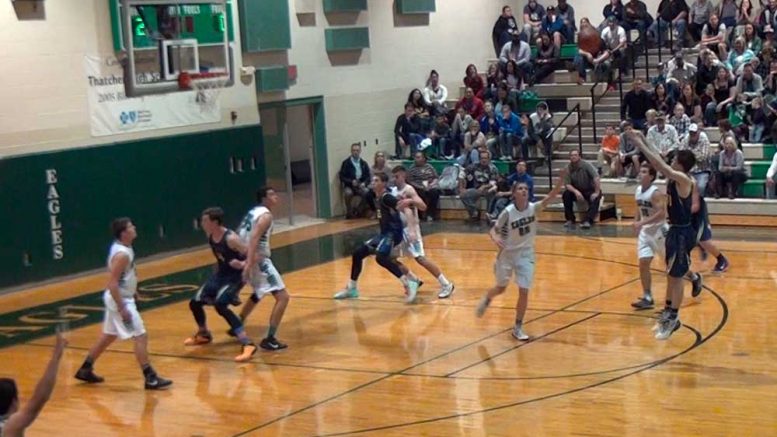 THATCHER – What a difference having a full squad makes.

The Thatcher Eagles (9-5 overall, 2-1 region) soared high at the start in their bid to upset the visiting powerhouse Pima Roughriders (15-2 overall, 5-0 region) but Pima was too strong down the stretch and prevailed in overtime, 50-41.

After Pima’s blowout 63-31 victory over a depleted Thatcher in the championship game of the Eastern Arizona College Holiday Tournament on Dec. 21, 2016, the Eagles fared much better on their home court and with a full squad. Both teams appeared evenly matched with Pima shooting 17-48 for the game and Thatcher 17-50. The rebound numbers were close as well, as Pima recorded 9 offensive and 24 defensive rebounds to Thatcher’s 6 offensive and 20 defensive rebounds. The biggest difference was the disparity in free throw attempts (21-2), with Pima’s big men getting to the line much more often, resulting in a 10-point swing for the Roughriders.

The Eagles initially jumped all over the flat-footed Roughriders, opening with three quick buckets to leap out to a 7-0 lead. Pima’s offense struggled against the 2-3 zone of Thatcher, and only point guard Trey Thompson could hit a field goal, going 2-4 in the opening quarter. By the end of the first, Thatcher held a commanding and dominating 16-5 lead and began to slow the game down. 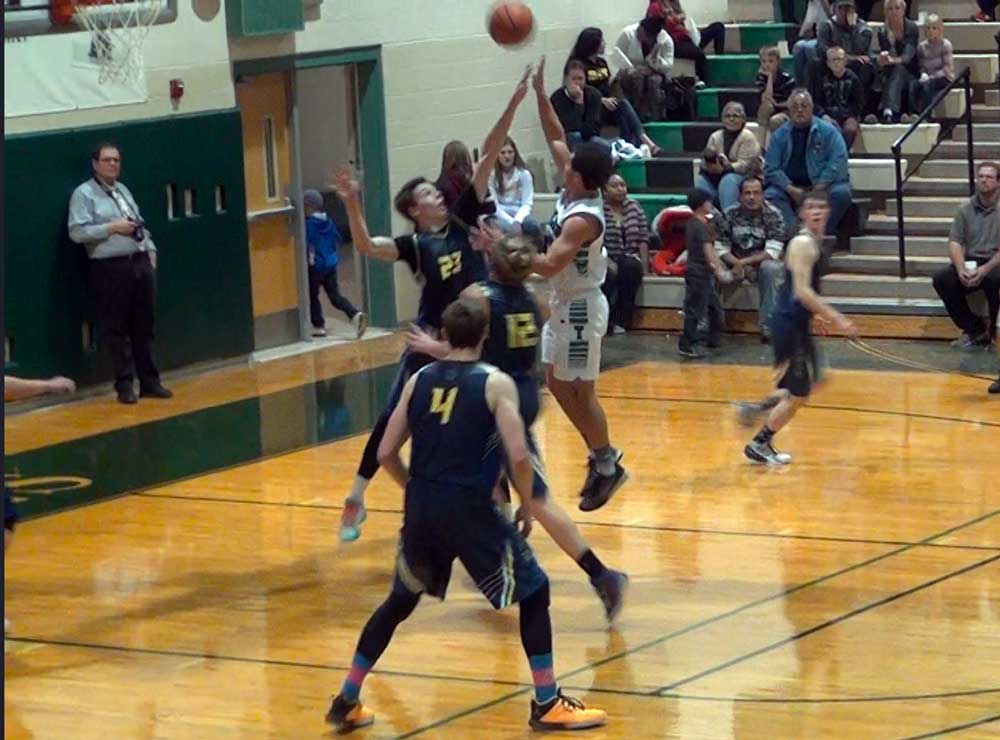 “I gotta give them (Thatcher) a lot of credit,” Pima head coach Cliff Thompson said. “ They played extremely hard; played well early on. They got us back on our heels and it took us two quarters to get back even with them.”

The Eagles played their game plan to near perfection in the first 12 minutes of the game, limiting the Roughriders’ big men’s touches down low with a smothering zone while isolating speedster Logan McMaster out on top on offense, where he zipped by defender after defender Pima threw at him to score easy layups or set up his teammates.

Pima started getting the ball down to Jarrett Kartchner later in the second quarter, however, and that, coupled with a timely 3-pointer from Alek Pruszynski and some tough defense of its own, helped Pima claw its way back to just down by four points at the half, 22-18. Kartchner brushed off some early poor shooting to finish as the game’s high scorer with 16 points on 6-13 shooting from the field and 4-9 from the free throw line. 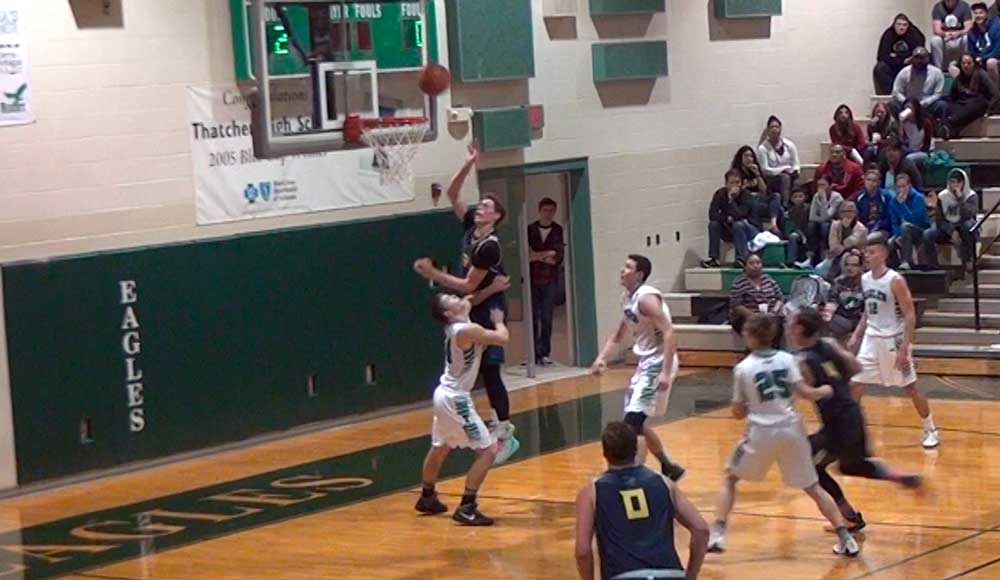 The tables were turned after halftime and Thatcher spotted Pima five straight points behind an opening 3-pointer by Thompson followed by free throws by Pruszynski, who was fouled on a  3-point shot and made two of three free throws to give Pima its first lead of the night, 23-22 with about six minutes left in the third quarter. Pruszynski finished with 8 points while going 2-10 from the field (both makes were 3-pointers) and 2-3 from the free throw line.

Pima went 12-21 from the free throw line for the game, while Thatcher had just two trips to the charity stripe – both on and-one opportunities for McMaster, who hit 1-2.

Thatcher took the lead right back on a 3-pointer by Cole Motes, and the two teams slugged it out the rest of the quarter with Pima emerging with a slight, two-point lead, 31-29.

Pima stretched its lead to 35-29 early on in the fourth, but Thatcher came roaring back and tied the score at 37-37 with 3:41 left in the fourth quarter after McMaster completed and and-one play with a layup and accompanying free throw. McMaster finished with 11 points on the night on 5-12 shooting from the field and 1-2 from the free throw line. Carson Goodman tied McMaster for the most points on his return to the lineup and had 11 on 5-15 shooting.

The teams must have liked playing against each other because when the final regulation buzzer went off they were tied 39-39 and headed to overtime. 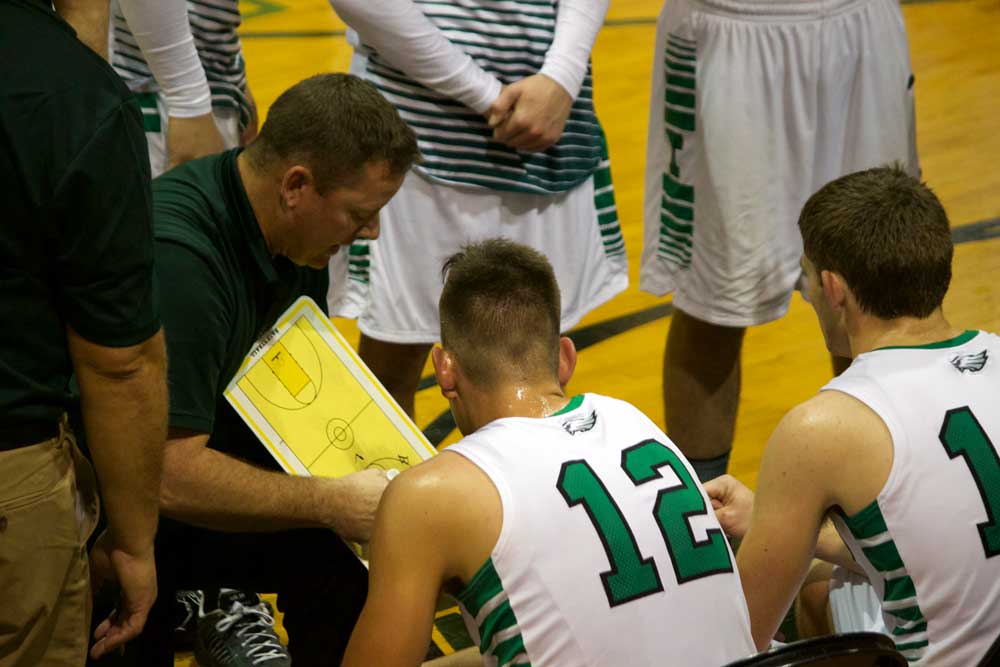 Pima owned the overtime period and completely shut down Thatcher’s ability to score. Dawson Pruszynski made some big plays in the extra period and hit some big free throws to help seal the deal. He finished the night with 9 points on 2-6 shooting and 5-6 from the free throw line. Dawson just missed a double double as he also corralled in 10 rebounds.

The Eagles could only muster a single field goal in the extra period after the game was already settled, and Pima held on to win, 50-41.

“I think Thatcher played extremely well, and I’m happy that we came together in the end and finished the game really well,” Cliff Thompson said. “I think it was two good teams playing really tough.”

Thatcher will next travel to Morenci on Friday to take on the Wildcats (9-6 overall, 2-1 region), while Pima will have a week of rest before hosting the hapless Benson Bobcats (0-12 overall, 0-3 region) on Jan. 10.