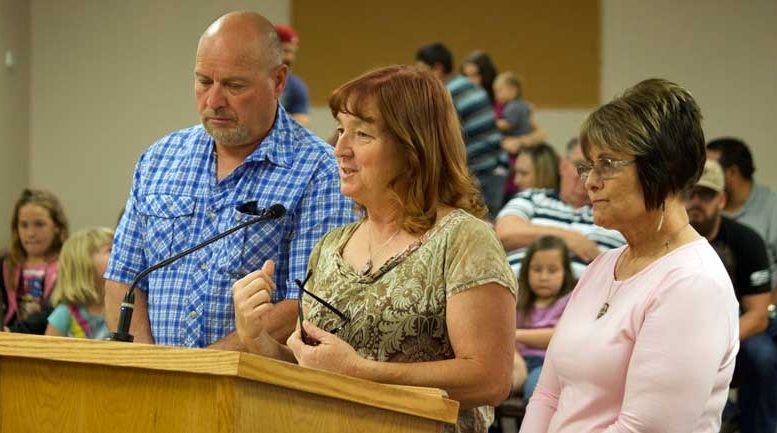 SAFFORD – When a rehabilitation center in another county starts refusing clients from Graham County because too many have filled the beds, that could be taken as a sign that the Gila Valley has a disproportionate number of people effected by addiction to available recovery services.

The Addiction and Recovery subcommittee of the Graham County Substance Abuse Coalition (GCSAC) is battling to help improve the odds of an addict gaining sobriety by trying to bring a drug treatment center to the area and open a sober living facility.

Safford Councilor Chris Taylor serves as the chairman for the subcommittee and is the CEO/President of Desert Eagle Addiction Recovery, which previously operated a sober living facility before being closed down for incorrect zoning and a lack of funding. Taylor, who is also an Army combat veteran, knows addiction firsthand, having overcome an opioid addiction after being admitted to a trauma program in Palo Alto, Calif.

“It’s better to do it as more of a collaborative effort than Desert Eagle alone,” Taylor said. “So, I think this is going to be more successful.”

Taylor ran on a position that he would fight the scourge of drug abuse in the Gila Valley by helping addicts turn their lives around just as he had. Since being sworn into office, he is now working as a liaison between the city government and the larger treatment providers to help bring in a rehabilitation facility.

“The Salvation Army was interested in talking with me, so I’m trying to set that up,” he said. “Because they know that in their facilities in Phoenix and Tucson, a large portion of those beds are always occupied by people from Graham County, and there are other places in Phoenix that have said the same thing. So, what I’m trying to do is see if its feasible for them to come and have a treatment center here.”

At the Safford City Council’s Monday night meeting, GCSAC Coordinator Kathy Grimes was joined by Addiction and Recovery subcommittee members Jan Napier and John Howard and spoke to the council about its lofty goals. Grimes has been fighting drug abuse in the Gila Valley for more than 13 years, having help found the Coalition in 2003 to battle the methamphetamine problem. The focus shifted to prescription drug abuse in 2005, and now abuse of opioid prescription pills is listed as one of the gateways to heroin abuse, both statewide and nationally.

Napier said one of the goals of the subcommittee is to try to get more community members involved to “encourage and help get more treatment options” locally, including a treatment facility. She also added that the Arizona Counseling & Treatment Services LLC (ACTS) has a new program to help people get over opioid addiction through monthly intravenous shots of Naloxone (the opioid antidote) and Suboxone (buprenorphine).

“They’re no longer craving because it has the Suboxone, and, if they do use, the Narcan keeps them from getting high,” Napier said. “It’s really an exciting treatment for opioid addiction, so we’re trying to help get the word out.”

While the GCSAC and the Addiction and Recovery subcommittee may not be able to start its own treatment facility, it is looking get enough state and federal grant funding to open a sober living facility. Taylor said the initial startup for that would likely be between $100,000 to $150,000 for a six-month to one-year beginning with an annual operating cost of roughly $150,000 before becoming self-sufficient. He stressed that funding for such a facility would be done through grants and that local taxpayer money would not be used.

“In the next couple months we’ll find out what grants we can get or what not and how much money we can raise,” Taylor said. “The biggest thing is to make sure we have enough funding so we can operate it.”

Howard said having a sober living facility and a support system is critical to an addict’s successful treatment.

“They come out of these recovery institutions and then they come back to Safford and they have nowhere to go,” Howard said. “So, they go back to the same chain of events and its a revolving door. They have no way to get clean and stay clean.”

Safford Mayor Jason Kouts agreed with Howard and said he has felt that sting as well as a father of a recovering opioid addict.

“You have 100 percent my support as a family of a recovering addict,” Kouts said. “I love my son, and he just can’t come back here. I love Safford, and I want him to come back here. So, I will do anything – sweat, blood and tears – to help launch whatever I can . . . Don’t stop. Don’t quit. We can’t afford to quit.”

What the group also needs is more local support and has asked anyone who can make it to join them at their monthly meetings every second Tuesday at 11:30 a.m. at the Southeastern Arizona Behavioral Health Services, Inc. (SEABHS) building at 1615 S. 1st Ave.

From rock bottom to redemption: The Chris Taylor story-part two