PHOENIX – A Mexican national wanted in his native country for sex trafficking minors was handed over to Mexican law enforcement officials Tuesday by U.S. Immigration and Customs Enforcement (ICE) at the DeConcini Port of Entry in Nogales. 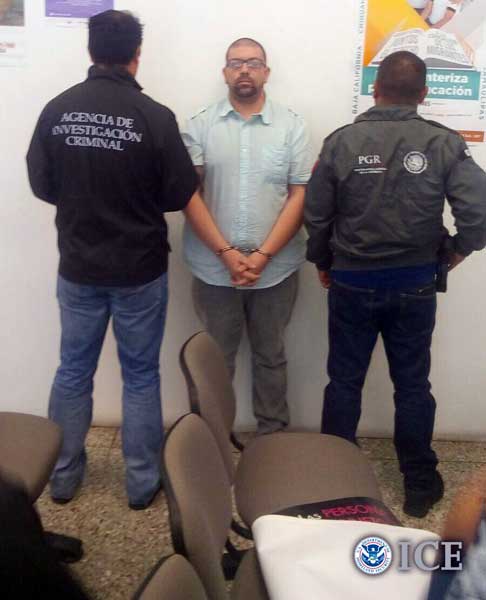 Contributed Photo/Courtesy ICE: Valentin Mendiola-Castaneda, 35, awaits to be transferred to Mexican authorities. He was wanted in Mexico for trafficking minors as sex slaves.

In addition to sex trafficking, the Mexican arrest warrant issued in June 2014 charges Mendiola- Castaneda with the aggravated sexual exploitation of minors. The charging document alleges Mendiola-Castaneda sexually exploited two young girls at hotels and residences in Toluca, Mexico, and participated in sexual acts with the minors.

“The removal of this sex trafficking suspect to face criminal charges in Mexico is the direct result of continued cooperation between ICE and our law enforcement counterparts in Mexico,” said Henry Lucero, field office director for ERO in Phoenix. “Foreign criminal fugitives who believe they can escape justice by fleeing to the U.S. will be apprehended and handed over to the proper law enforcement authorities.”

Relevant Department of Homeland Security databases indicate Mendiola-Castaneda has been repatriated to Mexico 11 times since 1998. He also has two federal convictions for entering the U.S. illegally and served prison time in both cases. ICE reinstated Mendiola-Castaneda’s prior removal order paving the way for Tuesday’s repatriation.