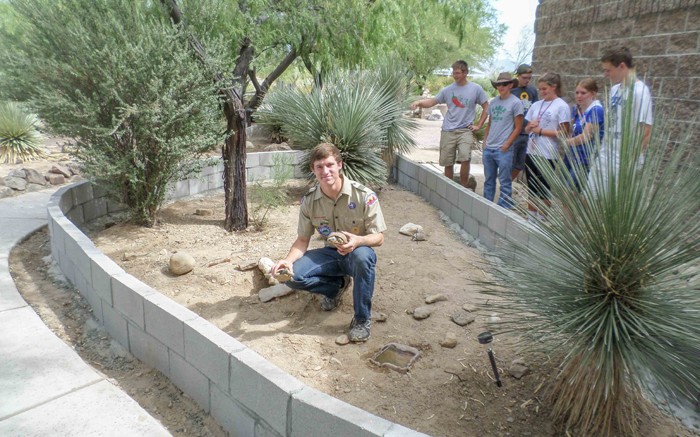 THATCHER, AZ— EAC’s Discovery Park Campus was recently honored with two Boy Scouts of America Eagle Scout projects. With help from family and friends, the Eagle Scout candidates, Riley DeSpain from Troop #5042, and Brandon Udall from Troop #5736, each completed a native habitat area for four Western Box Turtles and two Mojave Desert Tortoises housed at the Campus. The new habitats are a vast improvement to the small area where the reptiles were originally kept. They are now housed in separate areas that cater to each species’ specific needs.

The Discovery Park Campus has long been known as a beautiful example of our native habitat and a hub for information and education on science related topics, including the native Western Box Turtles and Sonoran/Mojave Desert Tortoises on display in the patio area of the Gov Aker Observatory. It is illegal to capture wild turtles and tortoises, and the animals at Discovery Park Campus were not taken from the wild; they are abandoned pets, bred from captive animals or are rescues, and are used to teach the public about these remarkable reptiles.

Eagle Scout candidate Riley DeSpain built a habitat area using mortar and bricks and provided cover with artificial dens and existing desert plants for hiding places for the box turtles. The Western or “Ornate” Box Turtle is a small turtle found in our local desert areas. They grow to about six inches long and usually have bright or dark yellow lines, depending on the turtle’s age, that radiate on its shell. The Arizona Game and Fish Department has developed the “Ornate Box Turtle Watch” so members of the public can report a wild turtle sighting by filling out a form from the Arizona Game and Fish Department’s website at www.azgfd/turtle.

Eagle Scout candidate Brandon Udall built a secure habitat along the walkway into the Gov Aker Observatory buildings for the two Sonoran/Mojave Desert Tortoises. Although closely related to turtles, the tortoises are cross-bred between the very similar Mojave Desert Tortoise found in the northern Arizona and Nevada deserts, and the Sonoran Desert Tortoise found in the southern Arizona and northern Mexico deserts. They have a heavy greenish-brown shell that blends into the surrounding desert landscape. They can grow up to fifteen inches in length.

The habitats are open to the public Monday – Friday from 8 a.m. to 4 p.m., and Saturday from 4 to 9 p.m. Exhibits include the Graham County Historical Society’s display gallery of historical artifacts, the “History of Astronomy” gallery, the exciting “Polaris” Shuttle simulator with three new ride experiences; a “Tour of the Solar System,” “A wing and a prayer” airplane adventure, and “Rat Race!”, a computer graphic, full-motion roller coaster ride—with rats! Visitors are invited to finish off their Saturday evening by observing the fascinating night sky objects through the 20-inch Tinsley Telescope, in the Gov Aker Observatory. All activities of EAC’s Discovery Park Campus are free of charge and just minutes away from home. For more information call (928) 428-6260 or email discoverypark@eac.edu<mailto:discoverypark@eac.edu>.