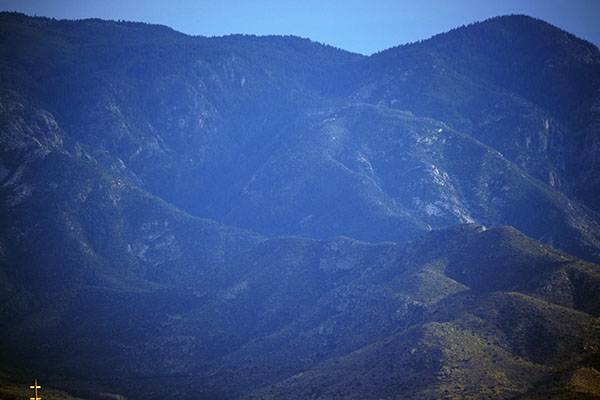 Jon Johnson Photo/Gila Valley Central: A man was rescued off Mount Graham on Tuesday after laying down his motorcycle and going over the edge of the roadway.

MOUNT GRAHAM – The tight corners of State Route 366 up Mount Graham can be exhilarating or sickening, but they are always unforgiving if one is traveling too fast.

A motorcyclist was rescued Sunday morning from Mount Graham after he skidded his 2015 Harley-Davidson SL motorcycle off the roadway and over a small ledge. Authorities were notified of the crash at about 10:50 a.m.

The operator of the motorcycle, Jason Weiss, 43, of Arizona City, suffered only minor injuries and there was only minor damage to his bike. However, the ledge was too great for him to escape from himself, and officers with the Arizona Department of Public Safety (DPS) had to extricate him from the side of the mountain.

According to DPS Sgt. Dan Long, Weiss was eastbound when he failed to negotiate a curve to his left around milepost 124 above Wet Canyon. After not making the curve, Weiss laid the bike down and the two went over the side. While there are plenty of curves that drop off significantly down the mountainside, but this curve only had a slight loss in elevation. A passing motorist heard Weiss yell for help and called the police.

“He got off the right side of the road and hit the embankment there and then got into a small tree,” Long said. “That shut it down from there.”

After being extricated from the mountainside, Weiss was transported to Mt. Graham Regional Medical Center, where he was treated and released, according to Long. His motorcycle was recovered by Nuttall’s Towing, which hauled it down the mountain as well.

Long said speed was a likely factor in the crash.