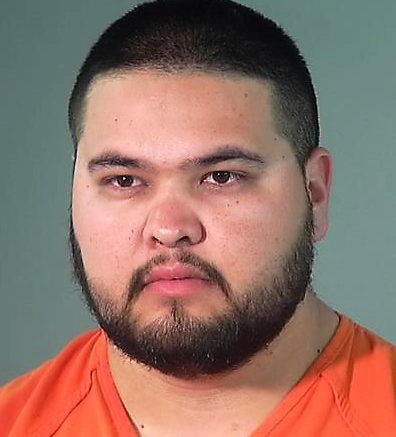 Contributed Photo/Courtesy GCSO: Diego Durazo was booked into the jail after allegedly endangering his family while they were returning from a camping trip.

SAFFORD – A family camping trip ended on a sour note early Tuesday morning, when the father allegedly endangered his family while they were driving home.

Diego Durazo, 23, was arrested and booked into the Graham County Jail on three counts of endangerment/domestic violence after allegedly nearly causing the vehicle the family was in to crash.

According to statements Durazo’s wife made to police, Durazo became intoxicated while they were camping and on the way home began to criticize his wife’s driving. Also in the car were the couple’s children, ages 5 and 10 months.

After Durazo allegedly called his wife names and began to say derogatory things about her deceased mother, the victim pushed Durazo’s head away from her. Durazo responded by slapping his wife while she was driving and pulling on the emergency brake, according to a Safford Police report.

The victim then began to drive to the Safford Police Department and Durazo allegedly pulled the emergency brake again, this time almost causing the vehicle to crash into an antique store. The mother managed to drive near the entrance of the jail and get the attention of a detention officer, who then called a Safford officer to the scene.

After Durazo allegedly admitted to endangering his family by pulling the emergency brake while they were driving, the officer arrested him and walked him over to the jail.