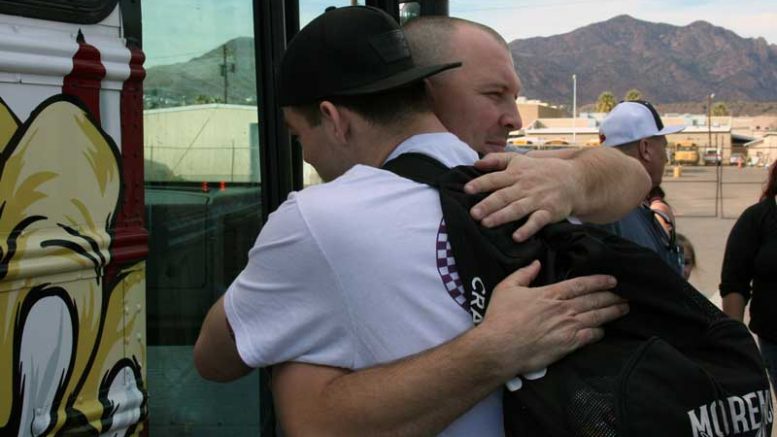 Photo By Walt Mares: Morenci High School head wrestling coach Casey Woodall and three-time state champion Christian White, a senior, embrace Feb. 11 after the Wildcats returned to Morenci with their second consecutive Division IV State Championship. It was a long, hard-fought season for the 'Cats, who showed what hard work, dedication and team spirit can accomplish.

Wildcats qualify seven for finals in unheard of feat

The sirens of police cars and fire trucks wailed as they passed through Clifton.  People no doubt wondered what all the commotion was about. The answer lay sandwiched in between the vehicles whose sirens sounded along with red and blue lights flashing.

It was the Morenci High School activity bus bearing the state champion Morenci wrestling team. There was indeed cause to celebrate as the Wildcats brought home their second consecutive Division IV State Championship Trophy. Morenci took the title with 218 points and runner-up St. Johns had 170.

When the bus arrived in the parking lot of the school district office in Morenci, team members began stepping off and were all but mobbed as they were given handshakes and hugs. There was elation all around.

Part of Morenci’s climb to the top at state includes making state history. Seven Wildcat wrestlers made it to the championship round; four of them won. 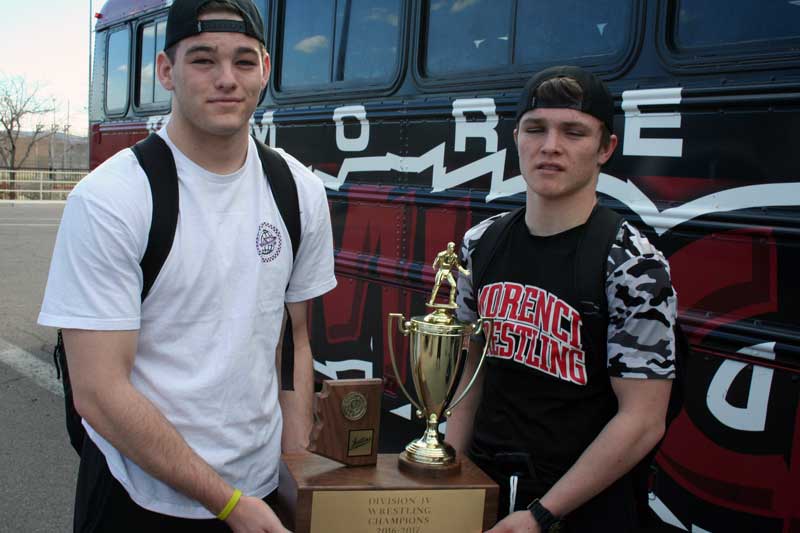 Seniors Jordan Arbizo, at heavyweight, and Christian White, at 195, both claimed state titles. For White it was his third state title. Marky Roybal, a sophomore, took state at 132 lbs., and Corey Cota won his state title at 128 lbs.

Frankie Gonzalez, a senior, was runner-up in the 170 lb. weight class. Woodall said, “Not bad for wrestling most of the season with a torn ACL. That took a lot of heart.”

When a gilavalleycentral.net reporter’s eyes met Woodall’s,  there was no need for comment. Yes, the Wildcats are young and Morenci will have an experienced team returning for the 2017-18 season.