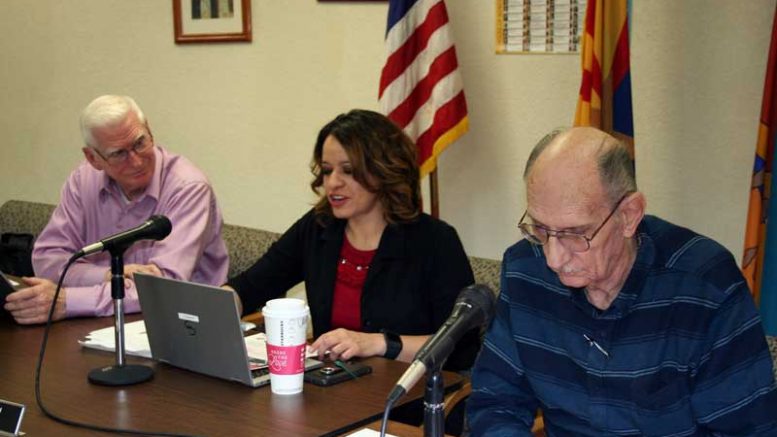 Photo By Walt Mares: Clifton Town Councilor Laura Dorrell, center, speaks on a proposal to make ban texting while driving a motor vehicle within the town limits. At left is Councilor Ray West and at right is Mayor Felix Callicotte. The council did not make a decision at the Feb. 9 meeting as it was an item only for discussion. Councill members agreed with Councilor Ray West that the issue be further examined before any decision is made.

Town of Clifton residents will soon be able to pay their sewer and other accounts related to the town with a credit or debit card. That also opens up the possibility being able to pay online.

The town is also exploring the possibility of making it illegal for motorists to text while they are driving within the town limits. There are already two Arizona towns that have such an ordinance.

Those were the main topics covered at the council’s Thursday, Feb. 9 meeting.

At present, sewer users make payments by going to Clifton Town Hall and using cash or a check. Checks may also be mailed. Being able to use debit or credit cards is intended to make bills easier to pay. Town Manager Ian McGaughey noted paying with cards may make it more convenient for those who find it difficult to make the trip to Town Hall because of disabilities or other factors. He advised the council of companies the town is considering hiring to provide the necessary service to implement use of cards and online payment.

Use of credit and debit cards will not immediately be available but should be implemented in the very near future, according to McGaughey.

Hopefully, the use of cards can contribute to payments being paid regularly and on time. At present, the town’s sewer budget  is in in the hole and has been so for many years. Non-payment by some sewer customers has long been a problem and has led to the town filing liens against property owners and involved court actions.

The sewer fund deficit goes back to at least the early 1980s. Part of the problem lay with the attitudes of councils who served during that period. A former vice-mayor once said, “we owe it to the people” to provide free sewer service. However, as federal and state regulations tightened regarding solid and liquid sewage disposal, the town was obliged to make efforts to meet those standards. Clifton fell far behind in meeting required standards resulting from lack of enforcement in collection of fees.

In recent years, the town hired a code enforcement officer who sends out letters reminding those who are delinquent in their accounts to at least make some payment to avoid having service terminated. Service can be cut with the use of a plug that prohibits access to a sewer line.

McGaughey pointed to a recent rate increase in sewer fees to eventually allow the town’s sewer fund to at least begin to break even.

The cards can also be used to pay North Clifton RV park user fees and the town’s magistrate court..

The possibility of banning texting by motorists while they are behind the wheel drew and driving within the town limits drew lengthy discussion. Councilor Ray West strongly questioned the applicability and enforcement of such an ordinance. West questioned how police will determine if a motorist is making an emergency call, perhaps calling a doctor, or just chatting.  He said the ordinance could be “possibly cumbersome.”

Councilor Laura Dorrell agreed with some of West’s comments, but did not object to the implementation of efforts to establish the motorist texting ban. All other council members spoke in favor of the ban, and Mayor Felix Callicotte voiced very strong support.

Establishing the ban will not be easy. Some research has already been done by the town manager and Police Chief Omar Negrete, but a great deal more fact-finding will be involved. Questions remain of how it will be enforced and what the consequences for drivers caught texting will be.

“It’s going to be a challenge,” Negrete said. “We’ll do some more research on it and see how other towns and cities are doing it.”

Overall, councilors expressed concern about motorist safety and the tragic consequences that may ensue from drivers being distracted.

The Arizona Legislature did pass a law in January banning teenagers who have only recently acquired a driver’s license from cell phone use while driving. However, state lawmakers refused to pass a ban that includes adults.

• The council approved moving the Farmers Market Day from Thursdays to Wednesdays, beginning March 1. The market is held at the Clifton Train Station. It includes sale of hamburgers by the Mares Bluff Veterans Memorial Committee during late morning and in the afternoon.

• A quit claim deed was approved for property owned by the Clifton Elks Lodge #1174 that is being given to the town. The property in the Ward’s Canyon Cemetery had been reserved specifically for use by the Elks Lodge, which no longer has a lodge in Clifton.

• A bidding process for repairs and maintenance of the historic Clifton Train Depot was discussed but no action was taken.

• The council accepted the findings for the Fiscal Year 2016 financial statements by the Clifton Larson Allen auditing firm. Mayor Callicotte said the town passed the audit “with flying colors.” The name of the firm that includes Clifton is coincidental, and the town has no ties to the firm.

• In his report to the council, McGaughey said the offer to give the Reardon Hotel to the town “is off the table.” The hotel’s owner has found a private buyer.

• The Clifton Town Council meets regularly on the second Thursday of the month. Meeting agendas are available to the public at least 24 hours prior to the meeting. For more information or to possibly be placed on the agenda contact Town Hall at (928) 865-4146.