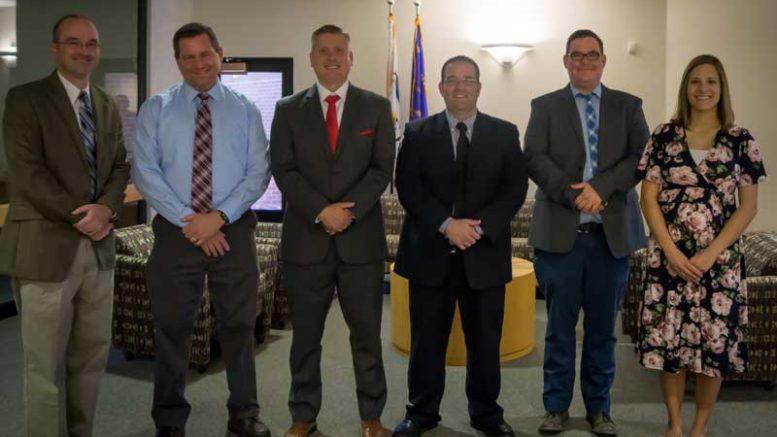 THATCHER — Eastern Arizona College was excited to welcome several new faculty members and administrative staff to its ranks this fall.

“We worked diligently over the summer finding the most highly qualified individuals to be part of our team,” said EAC’s Provost Jeanne Bryce. “And our hard work has paid off with this talented group of individuals.”

Johnathon Clegg, Allied Health Associate Professor, is a Paramedic and EMT for Rural Metro in Safford. He began his career in allied health as an EMT-Basic in 2009, became certified as a paramedic in 2012, and has obtained the certifications required to instruct in the various components of allied health and paramedicine. Clegg also has experience as an Occupational Health and Safety Coordinator and has Firefighter 1 & 2 certification. Over the last year, he has provided instruction to EAC Paramedic and EMT students who are preparing for National Registry skills testing and taught related subjects as needed. He has a Bachelor of Science in Health Science and Allied Health, from Northern Arizona University (NAU), and associate’s degrees in Liberal Studies and Paramedicine from EAC.

Nathan Cline, Biology Associate Professor, came to Thatcher from EAC’s Globe Campus where he taught Biology, Health Care Education, and EMT courses in classrooms, labs, and online. Prior to teaching at Gila Pueblo Campus, he was at Brigham Young University for nine years teaching and researching in the Plant and Wildlife Science Department. As a graduate research assistant at BYU, he helped collect and analyze ecological data and wrote scientific manuscripts. In his vita, he listed ten publications and fifteen presentations to his credit. In Globe, Cline spearheaded an effort to bring Cobre Valley’s STEMfest to Gila Pueblo Campus and participated in curriculum planning for Cobre Valley Institute of Technology (CVIT). He holds a Ph.D. in Wildlife and Wildlands Conservation from Brigham Young University, a Master of Science in Wildlife and Wildlands Conservation, also from BYU; a Bachelor of Science in Biology (Botany), with a chemistry minor from NAU; and a Bachelor of Arts in Humanities (English) from Ohio State University.

Scott Dahl, Theatre Design, and Production Associate Professor has more than 10 years experience as a design professional, instructor, project manager, and CADD operator. He has designed theatrical settings, theme park attractions, interactive exhibits, corporate event environments and commercial interiors. Some notable clients were the NBA, Miami Heat, San Antonio Spurs, Target Corporation, Children’s Television Network, Sesame Street Live, Six Flags Theme Parks, AT&T, GE, Universal Studios, and Disney Productions. Dahl also has 10 years of university teaching experience and was most recently Program Chair in the School of Design at Westwood College Online/National American University. He has taught at Nazareth College in New York, University of Michigan-Flint, and the University of Idaho. He holds a Master of Fine Arts in Scenic Design from the University of Massachusetts at Amherst, a Master of Arts in Theatre History from State University of New York-Albany, and a Bachelor of Fine Arts in Industrial, Interior and Packaging Design from Rochester Institute of Technology.

Stuart Gibson, Art Associate Professor, came to EAC from Southwest University of Visual Arts in Tucson, Arizona, where he started his full-time teaching career in 2007. He also taught full-time at Kirk Newman Art School, Kalamazoo Institute of Arts, and as an adjunct assistant professor of Art and a graduate teaching assistant at The University of Arizona. Gibson has numerous awards, grants and residencies to his credit including the David Patterson Merit Scholar from the University of Arizona (UA) in both 2015 and 2016, the Juror’s First Place award at the Kalamazoo Park Club Exhibition in 2012, and an Artist Residency at the Starry Night International Residency/Retreat Center in Truth or Consequences, New Mexico. He holds a Master of Science in Educational Technology, a Master of Fine Arts in Studio Art, and a Bachelor of Fine Arts in Studio Art, all from the U of A.

Randy Morris, EMT/EMS Associate Professor & Program Coordinator, took on the responsibilities of EMT/EMS Associate Professor and Program Coordinator. Morris has 27 years’ experience in EMS and has been an Arizona State certified Paramedic, continuously in good standing, for almost 23 years. As a paramedic, Morris has served as a medical base supervisor, clinical education specialist, preceptor, public relations specialist and outreach education liaison. He has been an active and elected member of the Arizona DHS Southern Arizona EMS Sub-Regional Council and is familiar with the Arizona DHS Bureau of EMS policies, procedures and guidelines. He has been a flight paramedic for LifeNet, Sunrise Air Ambulance, and Critical Air Medicine. For almost nine years, he was the Assistant Chief of Police of EAC’s Campus Police Department and is dedicated to the mission, vision, and policies of EAC. He holds a Master of Science in Leadership from Grand Canyon University, a Bachelor of Science in Public Administration from NAU, an Associate of Arts in General Studies from EAC, and an AAS in Law Enforcement Technology from Rio Salado College.

Senecca Stromberg, Sports Medicine Associate Professor, came to EAC from Arizona Western College where she spent four years as an athletic trainer and adjunct professor for the Physical Education and Wellness Department. As an adjunct professor at AWC, she designed and developed instructional materials for the exercise and wellness courses she taught. During her graduate studies, she received her Performance Enhancement Specialist certification through the National Academy of Sports Medicine. In addition, she is an Arizona licensed and NATA certified Athletic Trainer and is a First Aid/CPR/AED instructor for the American Red Cross. Prior to her experience in higher education, Stromberg was the head athletic trainer at Cibola High School and continues to serve as the athletic trainer: sports medicine staff for the Arizona Volleyball Festival, Inc., on a seasonal basis. She earned her Master of Science degree in Performance Enhancement and Injury Prevention from California University of Pennsylvania, and her Bachelor of Science degree in Athletic Training from NAU.

Cameron Turner, HPE Associate Professor/Head Women’s Basketball Coach, came to EAC from Alaska where he was assistant men’s basketball coach for University of Alaska – Anchorage for six years. His accomplishments at UAA include a 116-60 record (.659 winning percentage), 42-19 over the last two seasons; 18 All-League Players; 2 All-Region Players; 2 All-Americans and 1 National Player of the Year. His team has a team cumulative GPA of 3.19 over the last six years. He had 17 Academic All-League and 2 Academic All-Americans. As Founder/Program Director/Head Coach of Willamette Reign/Oregon D1 Ambassadors AAU, Turner assisted 63 student-athletes in obtaining basketball scholarships from all levels. He has coaching experience at Lake Oswego High School in Oregon and Bourgade Catholic High School in Phoenix, Arizona. Turner earned his Bachelor of Arts degree in Criminology from Southern Oregon University and a Master of Science in Human Services from the University of Alaska – Anchorage.

Kayla Wright, Athletic Trainer, is a licensed athletic trainer in the State of Colorado and is in the process of getting her Arizona state licensure. She is also CPR/AED and first aid certified through the American Heart Association. Through her clinical rotations, she has worked with athletes at the high school, collegiate and professional levels and with a variety of different sports including football, volleyball, basketball, soccer, cross country, track, tennis, wrestling, and golf. With the Army Olympic World Class Athlete Program, she worked at the U.S. Wrestling Olympic Trials. She was an athletic trainer for a high school district in Colorado and worked as a contract athletic trainer for several tournaments/camps for collegiate and Olympic athletes. Her work experience includes volunteering in fifth world countries working with athletes with disabilities and coaching within her community. Wright has also worked as an in-patient rehab technician, a physical therapy technician, and a lead exercise specialist. She earned her Master of Science in Athletic Training from NAU and her Bachelor of Science in Kinesiology from ASU.