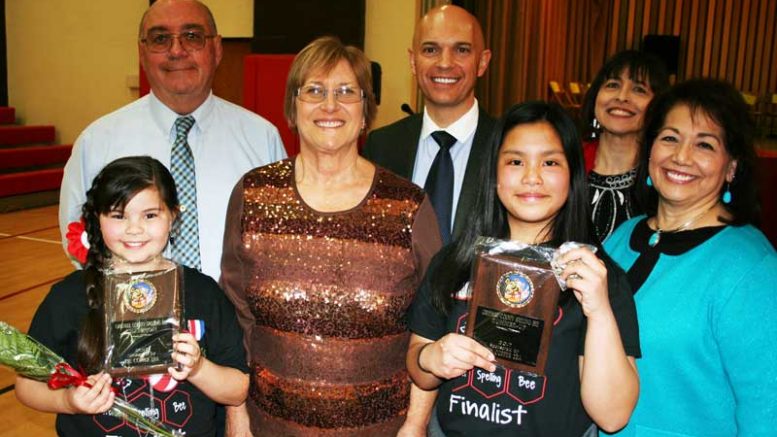 Photo By Walt Mares: Greenlee County Spelling Bee Champion Isabella Campbell, far left, and runner-up Kryzzia Cortez, second from right, beam as they hold plaques commemorating their hard-earned titles. Both attend Morenci Schools. With them are judges Debbie Thomas (in brown), of Duncan, and Grace Nabor (in Blue). Behind them are, from left, Greenlee County Schools Supt. Tom Powers, pronouncer Channen Day and judge Ronda Adams, of Morenci. The event was held Feb. 8 at the Duncan Elementary School gym.

Isabella Campbell did what few, if anyone else. has done. The Morenci fourth grader won the 2016-2017 Greenlee County Spelling Bee. Morenci sixth grader Kryzzia Cortez also shined by finishing as runner-up. 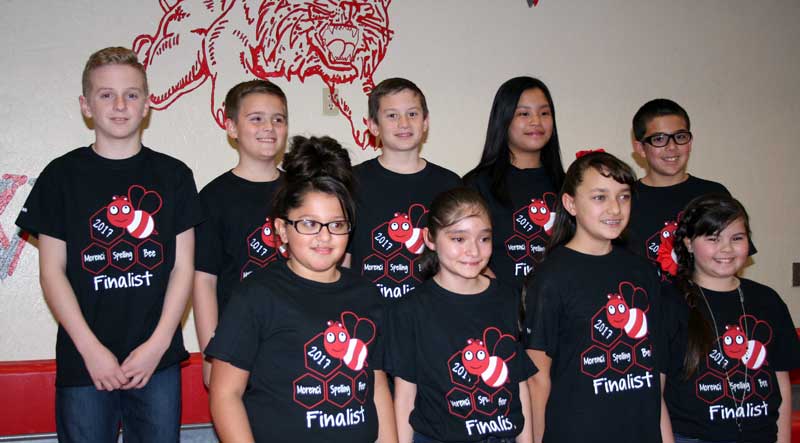 Greenlee County Schools Superintendent Tom Powers, who was been the primary sponsor of the event for several years, said he could not recall when a fourth grader has won the contest. He said he remembers when a fifth grader won, but not a fourth grader.

Campbell won on the words “coyote” and “collage.” Five others who had missed a word were allowed to vie for second place. Duncan’s sole contestant was Brandon Price, whose older sister, Jamie, won the championship in the 2009-2010 school year.

When all was said and done, Cortez  spelled two consecutive words correctly and claimed the honor as runner-up.

About 20 minutes before the contest began, from the sidewalk in front of the gym, one could look west and see the panorama of the sunset.

The sinking sun was golden. The sky to the southwest seemed to portend what was about to occur involving the county’s two largest schools. Some of the clouds were red and gray; Duncan’s school colors. Other clouds were red and black; Morenci’s school colors. For those who believe in such things, the sky could have been read as an omen of sorts, but it was not ominous.

Luck resulting from the clouds’ colors? Not hardly. It was a matter of preparedness and at least some familiarity with the words. For example, a Morenci student misspelled “Kahuna,” a Hawaiian word for leader or chief. It is a not a word commonly used in very rural Greenlee County. Others came close with words they were given, but not close enough. 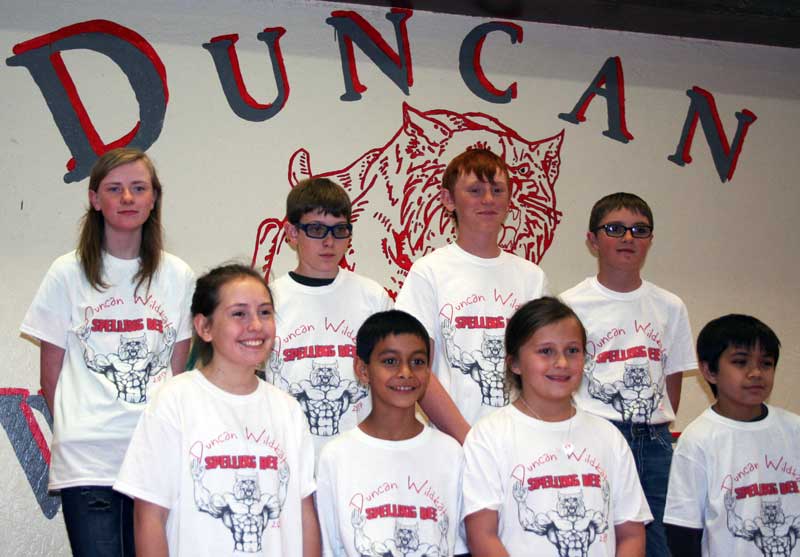 The atmosphere in the gym was one of a quiet excitement as family members and friends of spellers appeared to hold their collective breath until the speller they championed was either correct or incorrect. There was also much foot tapping among the spectators and some later commented they had butterflies in their stomachs. The facial expression of parents pretty much told the story. The anxiety and tension was visible on the faces of Campbell’s, Cortez’s and Price’s parents.

Their expressions were of exuberance as the contest ended. While Price did not finish in the top two, he is only a fifth grader and received hugs and smiles from his parents, Raymond and Amy, and handshakes from many others.

The spelling bee champion’s parents are Ron and Theresa Campbell, and the runner-up’s parents are Constantino and Marilou Cortez. Ron Campbell said Isabella “has a natural ability for spelling and reading, but I’d like to say it doesn’t come from me. It comes from her mom.”

Campbell and her parents will soon be traveling to Phoenix for the statewide spelling bee.

The state contest is sponsored nationally by Scripps-Howard newspapers. The words given to spellers came from an official Scripps-Howard list.  Greenlee has held a spelling bee since the 1985-86 school year. Morenci’s Julie Farquhar was the first champion.

Powers expressed his gratitude for the support of all who helped run the event. Local attorney Channen Day has been the spelling bee’s pronouncer for several years. Judges are Grace Nabor, who is the Greenlee District 1 Justice of the Peace, Duncan teacher Debbie Thomas and Morenci teacher Ronda Adams.