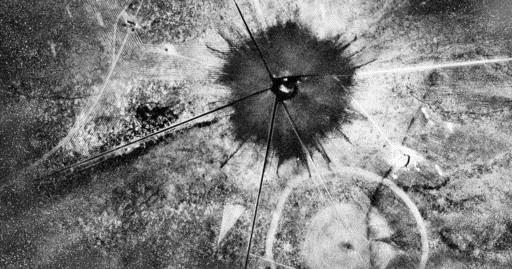 FILE - This July 16, 1945 file photo shows an aerial view after the first atomic explosion at Trinity Test Site, N.M. A report is scheduled to be released Friday, Feb. 10, 2017, on the health effects of the people who lived near the site of the world's first atomic bomb test. The Tularosa Basin Downwinders Consortium will release the health assessment report, on residents of a historic Hispanic village of Tularosa near the Trinity Test in the New Mexico desert. (AP Photo, File)

The surveys released Friday detailed residents’ stories from areas around the 1945 Trinity Test and argue that many Hispanic families later struggled to keep up with cancer-related illnesses. The health effects of the test have long been debated in New Mexico.

“It’s the first ever study done on the Tularosa Downwinders,” said Tina Cordova, co-founder of the Tularosa Basin Downwinders Consortium. “We wanted people to tell their stories in the fashion because it’s never been done before.”

Members of the Tularosa Basin Downwinders Consortium have long contended that those living near the site of the world’s first atomic bomb test in 1945 weren’t told about the dangers or compensated for their resulting health problems.

Since then, they say, descendants have been plagued with cancer and other illnesses while the federal government ignored their plight.

Chuck Wiggins, director of the New Mexico Tumor Registry, has said data shows cancer rates in Tularosa are around the same as other parts of the state. Cancer is one of the leading causes of death all over New Mexico, he said.

On Friday, Wiggins said he hadn’t gone through the report yet.

“It is detailed and lengthy,” he said. “I have not had a chance to systematically review the entire document.”

Around 800 community health surveys and two community focus groups were used to collect data for the report in partnership with the New Mexico Health Equity Partnership, an initiative of the Santa Fe Community Foundation.

Cordova said the report wasn’t a scientific epidemiology study but an attempt to gather information from residents who have complained about various forms of cancers in families who had limited access to health insurance.

The surveys involved residents of the historic Hispanic village of Tularosa and four New Mexico counties. They want lawmakers to include New Mexico in a federal law that compensates residents near atomic tests.

The Trinity Test took place as part of the Manhattan Project, a top-secret World War II nuclear development program run out of the then-secret city of Los Alamos, New Mexico.

Residents did not learn that the test had involved an atomic weapon until the U.S. dropped bombs on Hiroshima and Nagasaki and the war ended.

In 2015, U.S. Sen. Tom Udall, D-New Mexico, pressed the Senate to include New Mexico residents in the law after meeting with Tularosa Downwinders.

“The Consortium’s Health Impact Assessment Report is important work,” Udall wrote in a letter to the group on Friday. “It adds to the body of evidence that people in this area were injured as a result of radioactive fallout and should be compensated by the federal government.”