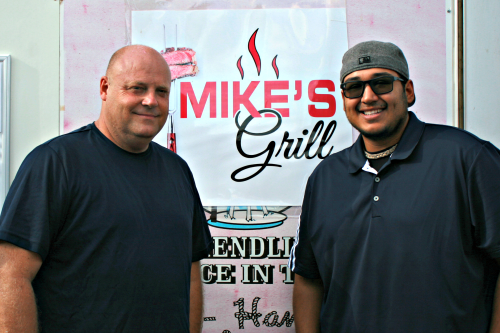 SAFFORD – Not every local kid hits the ground running, but when they do we root for them all the way.

Behind the Bull Pen bar at 912 W. Thatcher Blvd. in Safford sits a hidden gem serving up delicacies to eager patrons.

Mike’s Grill is a food trailer that is upping the ante for bar food. For now, the grill specializes in hamburger-type entrees with several unique plates such as the Navajo Taco and the Fry bread desert. In addition to the hot-served food, attendees at the grand opening were also treated to a musical performance by PB&H, winners of last year’s Battle of the Bands competition at the Graham County Fairgrounds. 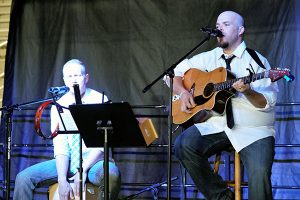 Lopez graduated from Safford High School after specializing in the culinary arts. Currently, he is attending Eastern Arizona College (EAC) studying criminal justice. After he graduates EAC, he plans to attend the Arts Institute in Scottsdale.

Any beginning chef has a long road ahead, and graduation from a culinary school is only the beginning. Lopez said chefs usually go through post-school apprenticeship programs, where graduates are paid little to nothing for several years. After that, they hopefully travel and learn from other cultures and cuisines,  gathering experiences to create an amazing resume for future employers along the way.

“I like Italian food,” Lopez said. “I actually want to go to Italy for a while to learn what they do and bring it back here.”

Lopez plans to return to the Gila Valley after he finishes his schooling and traveling, bringing back with him the knowledge and experiences of Italian life and food. He was excited about the grand opening and said that his favorite dish to prepare was the Philly cheesesteak. For those who don’t know, the Philly cheesesteak is a sandwich made from thin slices of beefsteak and melted cheese in a long hoagie roll.

Owner Michael Thompson said his cooks were practicing and perfecting recipes for several weeks in anticipation for the grand opening. The grill was in operation the last few nights prior to the grand opening to hone their skills. On Wednesday, Thompson plans to open for lunch and stay open daily.

“The specialty food will come later,” Thompson said. “We’ll get back to the steaks at night. Personally, I like to smoke meat, so we’re talking about smoke ribs, prime rib (and) pulled pork.”

Thompson said the grill’s best seller has been the Philly cheesesteak.

“You can’t get a good Philly cheesesteak in Safford,” Thompson said. “I think this is the best one and we’re selling a lot of those.”