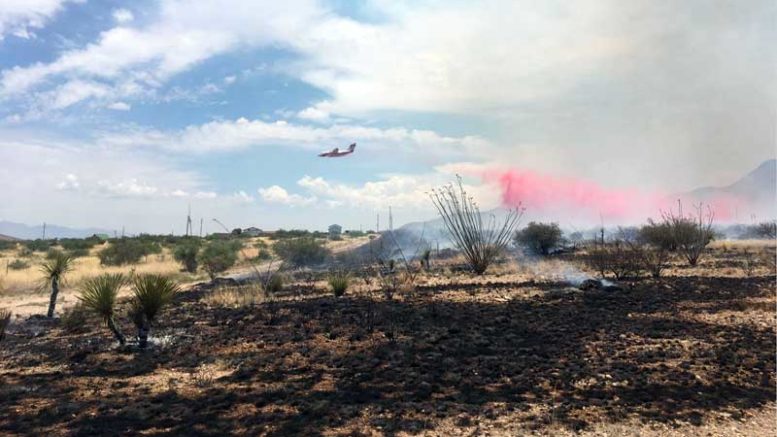 Contributed Photo/Courtesy U.S. Forest Service: An airplane makes a slurry drop while fighting the Lizard Fire in Cochise County. The fire has grown to nearly 15,000 acres as of Sunday morning and continues to threaten structures as homes can be seen in the background of this picture.

The Lizard Fire merged with another lightning-caused fire, the Dragoon Fire, on Friday. Both fires were started by lightning on Wednesday, the same day as the Frye Fire on Mount Graham.

The blaze is burning tall grass and brush and has threatened structures. According to the Forest Service, crews have focused their efforts to areas around a church camp and in an effort to keep the fire from spreading west. The fire is burning south of Interstate 10 and west of U.S Highway 191 South. Mandatory evacuations of some residents in the burn area have occurred.

This image shows the location of the Lizard Fire.

The area is in a Red Flag Warning for critical fire weather today and the blaze could rapidly spread because the fuels are especially receptive to the predicted windy conditions.

A Type I incident command team is battling the blaze with a total personnel of nearly 300. On Saturday, “rolling brownouts” occurred as modifications were made to the power transmission system as the Lizard Fire was threatening power transmission lines. The power was temporarily discontinued to a small number of homes.

A temporary flight restriction has been established over the area which includes unmanned aircrafts commonly known as drones.

There will be a Lizard Fire community meeting Sunday, June 11, at 4:30 p.m. at the Sunsites Community Center at 1216 Treasure Road in Sunsites.

The Bowie Fire was also lightning-caused on Wednesday, June 7, and has burned 3,026 acres of grass and brush roughly 13 miles southeast of Bowie. As of Sunday morning, the fire was 90 percent contained with minimal fire activity.