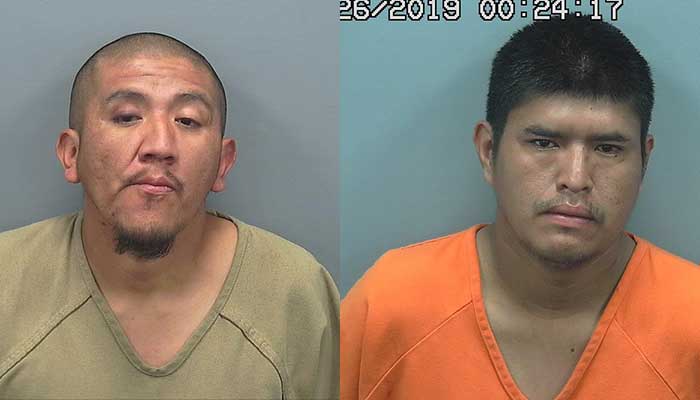 SAFFORD – Last Monday officers were dispatched to Firth Park around 1:00 in the afternoon in reference to a fight in progress. The victim told authorities that he had been struck in the face by brass knuckles by two other men. The victim had sustained a laceration to his chin that required medical attention required medical and an ambulance was called to the scene. The victim identified his assailants as Jeremy Hooke and Ivan Hunter.

An officer located Hooke and Hunter  in an alleyway off of Stratton Drive. Hooke originally denied being involved in a fight and denied possessing brass knuckles. He later admitted to being involved in the altercation. Hooke stated that he struck the victim in the face with a small portable speaker. When the officer asked him why he did that, Hooke stated the victim was talking to his wife at the park and that made him jealous. Hooke was found in possession of the speaker mentioned.

When authorities spoke with Hunter, he stated Hooke was in a fight with the victim and Hunter got in the middle between the two to break up the fight. Hunter denied assaulting the victim.

After speaking with witnesses and viewing camera footage, authorities determined both Hooke and Hunter had assaulted the victim. Video footage of the incident showed the victim sitting under a tree in a shaded area next to another person. Hooke apparently walked up to the victim (who was sitting down) and punched him in the face. The victim stood up and the two threw punches at each other. Hunter approached from behind the victim and stuck him in the face one time with a closed fist. Hooke and Hunter then walked away.