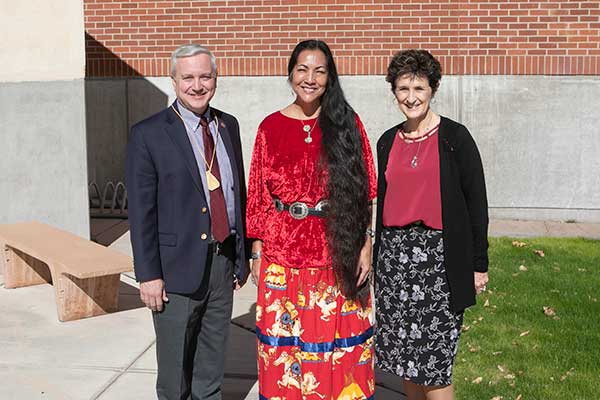 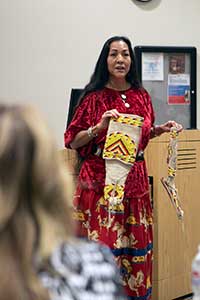 Titla began her remarks by teaching those in attendance how to greet Apache students. “We don’t have a word for hello, and this one is only three syllables,” stated Titla. “Repeat after me, dagote.´ Now you have a way to greet your Apache students.”

Titla was invited to speak on behalf of EAC’s diversity and inclusion committee that is charged with continuing to nurture a respectful and inclusive climate. Guided by seven strategic goals to strengthen EAC’s commitment to affording all students the same opportunities for a quality educational experience, this committee has seen significant progress, and will continue to emphasize employee training on diversity and inclusion that focuses on connecting with students from all cultures.

“Ancestry is so very important to all Native students,” said Titla. “It defines who they are and plays a key role in their academic success.” A descendent of three Apache chiefs, Titla emphasized the role her family played with her success. “I was very fortunate because my beautiful mother and awesome father encouraged me to stay in school.”

“Creating a community on campus for Native American students is so important,” stated Titla. “There are many unique challenges that Native students face. I had many mentors at EAC who took the time to really know me. One was named Paul Phelps, an instructor who saw a desire in me and recognized my love for writing. He encouraged me to change my major to journalism.”

Titla’s presentation included remarks on Apache clothing and jewelry and the meanings associated with them. She referenced the abalone shells that adorn many articles which represent White Painted Woman who is sacred to Apache beliefs. “As you get to know your Native students, please know that the things they wear and the things they do are for a reason,” stated Titla.

“EAC aspires to be a place of true equality, and it is crucial for our faculty and staff to have meaningful cross-cultural exchanges,” stated Jeanne Bryce, EAC vice-president of academic and student affairs. “We are so proud of Mary Kim and are grateful that she came back to campus to strengthen our ability to teach other Native students. In the process of learning more about Native cultures, I think we learn a great deal about ourselves.”