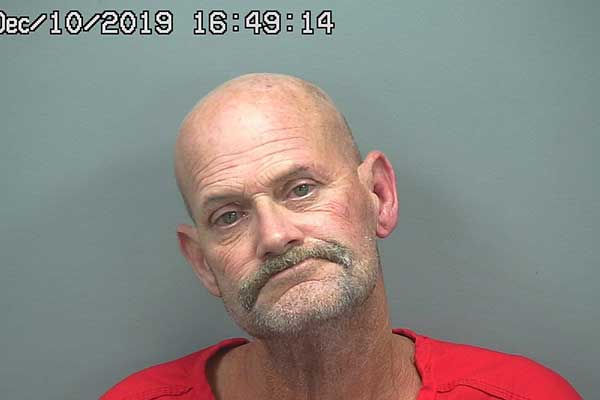 Safford police officers were dispatched to Highway 70 in the area near Big O Tires last Tuesday morning at approximately 8:00 a.m. in reference to a man who was wearing only a blanket and exposing himself to people as they drove by. Six people had reportedly called about the man.

When officers arrived they found a man matching the description in the Super Wok parking lot. He was on the ground trying to cover himself with a gray blanket. Responding officers reported that the man’s backside was not fully covered by the blanket and that he was obviously naked except for the blanket. An officer helped the man to his feet and asked if he was okay. The man had a strong odor of alcohol and slurred his words as he spoke. He identified himself as David Paul James Scott. He said that he was from Tucson and was staying at a motel in Safford.  The officer placed Scott in the back seat of a patrol vehicle because the outside temperature was approximately 40 degrees.

Another officer went to the motel where Scott said he was staying to get some of his clothes. When the officer arrived at the room he found another man in the room, who invited the officer in. The officer reported that there was trash thrown outside the room and there was trash all over the inside of the room. There appeared to be feces all over Scott’s clothing so the officer did not retrieve them.

Witnesses told authorities that Scott was walking down Highway 70 wrapped in the blanket. He was opening the blanket and exposing himself to cars as they drove by. He appeared to be chasing a woman down the street, yelling at her. Witnesses said that the woman appeared to be trying to get away from him. When an officer arrived, Scott apparently sat down on the ground and tried to cover himself as if he was hiding from authorities.

After interviewing six witnesses, an officer went back to the hospital and placed Scott under arrest for disorderly conduct. He was booked into the Graham County Jail.