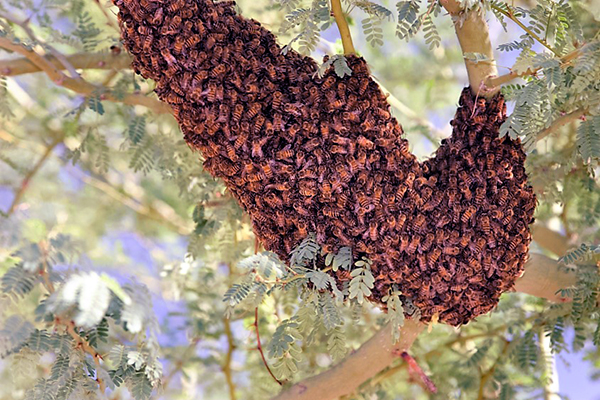 File Photo: Africanized bees located in a tree like this one attacked a man Saturday, stinging him more than 100 times.

GRAHAM COUNTY – A man was hospitalized Saturday after suffering numerous stings in a bee attack off East Hollywood Road.

The bees were likely Africanized “Killer” bees, as most all wild bees in Arizona have been hybridized.

A Graham County deputy was dispatched to the scene at about 7:30 a.m. regarding a bee attack. Upon arrival at the residence, the deputy located Severo Cabrera, 59, in distress. The deputy reported Cabrera’s eyes had begun to swell shut and that Cabrera said he was dizzy and had difficulty breathing.

The reporting party, who also was stung a couple of times, said Cabrera was washing his face outside when a swarm of bees in a nearby tree suddenly attacked him.

Cabrara corroborated the statement and said he took off his shirt after he was initially stung and tried to use it to swat the bees away. He also attempted to spray the bees with water to no avail. Eventually, the men were able to evade the bees by running from them.

Paramedics from Southwest Ambulance treated Cabrera at the scene and then transported him to Mt. Graham Regional Medical Center. According to a paramedic’s report to the deputy, Cabrera suffered more than 100 stings.

Africanized bees in the western hemisphere are nearly all descended from hives operated by biologist Warwick Kerr in Brazil in the late 1950s. Kerr was attempting to cross breed the African bees with European honeybees.

In 1957, a visiting beekeeper accidentally allowed some of the bees to escape, and the bees cross-bred with local European colonies and became one of the most successful biologically invasive species of all time.

Africanized bees are superior pollinators and honey producers compared to their European counterpart, but while the Africanized bees’ sting is no worse than a European bee sting, they tend to swarm more frequently and attack for longer periods. Africanized bees are also more easily provoked, attack in large numbers and pursue over distances up to a kilometer.

First reported in Arizona in 1993, the bees are now prevalent throughout the state. Over the past decade, the Gila Valley has had two human deaths and multiple animal deaths due to bee stings.