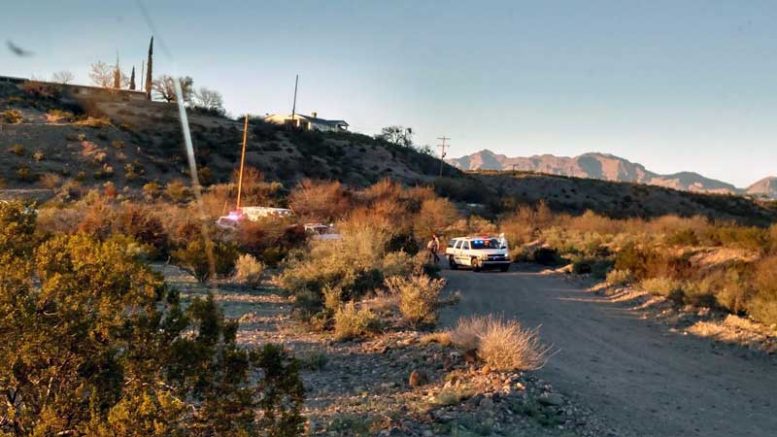 Contributed Photo/Courtesy Carlos Acuna: Deputies and other emergency workers respond to a bee attack north of the Gila River near Graham Canal Road on Monday. The attack sent three children, multiple officers and Safford Fire Chief Clark Bingham to the hospital with stings.

GRAHAM COUNTY – A dangerous bee attack reportedly sent a child, at least two deputies and Safford Fire Chief Clark Bingham to the Emergency Room at Mt. Graham Regional Medical Center (MGRMC) for treatment. Multiple other people, including another young boy who was with the chid victim, were stung but did not have to be treated at the hospital.

Bingham was one of the first responders to the scene near N. Sunset Boulevard and E. Graham Canal Road when emergency workers were dispatched for the bee call around 5:30 p.m., Monday.

The area is just east of the new jail construction in a populated subdivision. A witness at the scene described the bees reportedly being behind a residence in the 1600 block of Sunset Boulevard in a desert area. The bees were located in an old, rusty car that was placed in the ground to prevent soil erosion. Graham County Sheriff P.J. Allred said two boys were in the area when the bees attacked, with one of them managing to get away with only a few stings while the other was severely stung.

“The beehive was in one of the cars,” Graham County Sheriff P.J. Allred said. “It’s a bad thing. Those bees are bad. That’s part of Mother Nature and you just have to try to get away from them, but, in certain situations, there isn’t any getting away from them. That’s what makes them bad. They just keep coming and won’t quit.”

One of the victims, an 11-year-old boy was stung too numerous to count. A firefighter described the youth as being stung “more than I’ve ever seen.” Another firefighter said the amount of stings the boy suffered has placed him in “dire straits.”

The boy reportedly was swarmed by likely Africanized bees when located. Bingham, who was not in a bee suit, carried the boy – who was too weak to walk or run – toward the nearby Safford Fire Training Center on Graham Canal Road. That was when Bingham and the deputies were stung. As other firefighters arrived on scene in bee suits, Bingham was relieved and the boy was loaded into a Lifeline ambulance and taken to MGRMC. In addition to GCSO and the Safford Fire Department, Safford Police Department, and rescue from Pima Fire and Freeport McMoRan Inc. responded to the scene.

Firefighters destroyed the hive and killed as many bees as they could utilizing soapy water.

As of 7:35 p.m., a report from the hospital informed Gila Valley Central that Chief Bingham and the officers were responding well to treatment and they will be fine. The report also informed the 11-year-old boy was intubated prior to being prepped to be flown to Phoenix Children’s Hospital for treatment.

An initial report listed both boys were transported to the hospital, but subsequent information from Sheriff Allred listed only the one boy needed to be transported. The article has been changed to reflect that information.