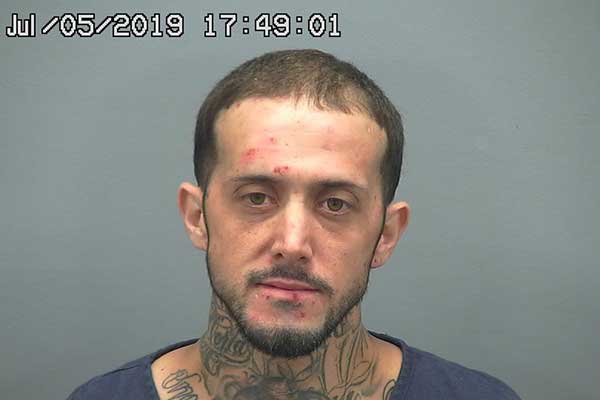 A Safford police detective, traveling west on 9th Street in Safford observed a bicyclist run a stop sign while turning right onto 6th Avenue. The detective activated his emergency lights when he pulled up behind the bike. The man looked back at the officer but kept riding. The detective turned on his siren momentarily but the man on the bike peddled faster and turned into the Court Street Apartments. By this time the detective knew that the subject was running from him.

The detective recognized the suspect as Anthony Garcia. He asked dispatch to run warrants on Garcia and confirmed that he had two outstanding warrants.

Garcia kept riding and ran the stop sign at Court Street and 8th Avenue. At this time the detective was joined by a deputy who arrived on the scene with his lights and siren. Garcia continued eastbound and turned right onto 7th Avenue. A probation officer heard the radio traffic and came out of his office to see if he could help. He saw Garcia riding towards him and yelled for him to stop. According to the police report, Garcia yelled an expletive as he made a maneuver to avoid the probation officer. The probation officer managed to catch up to Garcia in front of the Safford Fire Department. Garcia apparently lifted his leg to kick the probation officer but was ultimately pushed off of his bike into the roll up doors of the fire station, which caused him to fall of his bike onto the ground.

The probation officer held Garcia down until the deputy placed Garcia in handcuffs. Garcia complained that his head hurt from hitting the wall. He had two some visible scratches on his forehead. Paramedics arrived a short time later to evaluate Garcia’s injuries. They told authorities that Garcia appeared to be fine.

The detective asked Garcia why he ran from them. Garcia reportedly told authorities that he didn’t stop because he didn’t think he had done anything wrong. He asked an officer to take his property and his bike to his girlfriend.

While being booked into the Graham County Jail, Garcia stated that he believed his finger was broken. He relayed this information to two jail nurses, who gave him an ice pack and cleared him to be booked in.