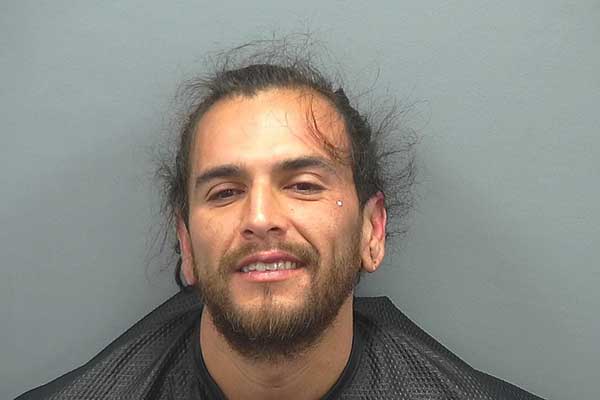 Safford police officers were dispatched to a convenience store on east Highway 70 on Sunday night at approximately 10:30 pm, in reference to a fight in progress. The reporting party said that it appeared that the men involved in the fight were intoxicated. Upon arrival, authorities found a group of approximately five men yelling obscenities and pushing each other. One man, later identified as Colton James Thomas, appeared to the be the instigator of the conflict.

An officer approached Thomas, who backed away from the officer as he approached. The officer ordered Thomas to turn around, then grabbed onto him and detained him in handcuffs. A query of Thomas’ name revealed that he had five current arrest warrants within Graham County. He also had several other non-extraditable warrants from Gila and Maricopa Counties. Thomas was placed under arrest for the warrants and searched before being placed in a patrol car.

The other men involved in the altercation told authorities that Thomas had approached them and began arguing with them. He then reportedly started fighting with. Thomas claimed that the other men hit him in the face for no reason. Thomas refused to provide any more details. Other witnesses also identified Thomas as the instigator, stating that Thomas walked up to the group and started fighting with them. None of the parties wanted to pursue charges.

Thomas was given a portable breath test, which registered his blood alcohol content (BAC) at .209. While being transported to the Graham County Jail, Thomas became belligerent and angry. He continually asked the officer for information about his warrants. The officer told him that he would serve him with copies at the jail.

Thomas was transported to the Graham County Jail, where he continued to be belligerent with jail personnel. After refusing to comply with the booking process, a detention officer attempted to put Thomas in a holding cell in the booking area. Thomas refused to enter the cell and repeatedly berated the officer. After repeatedly refusing the detention officer’s request to enter the cell, the arresting officer approached Thomas and told him that he had one last chance to walk into the cell peacefully. Thomas again refused. The Safford officer then delivered a hard impact push to Thomas’ chest and forced him into the cell. Thomas continued to kick and beat on the cell door while the officer completed the booking paperwork.

Once the paperwork was completed, the officer served Thomas with copies of his arrest warrants. Thomas apparently refused to look at the warrants and threw the papers back at the officer through the cell door, while flipping him off. Thomas’ warrants included two counts of Aggravated DUI, two counts of Aggravated Assault and Resisting Arrest, Violation of Promise to Appear, Failure to Pay (DUI), and Failure to pay (Shoplifting).