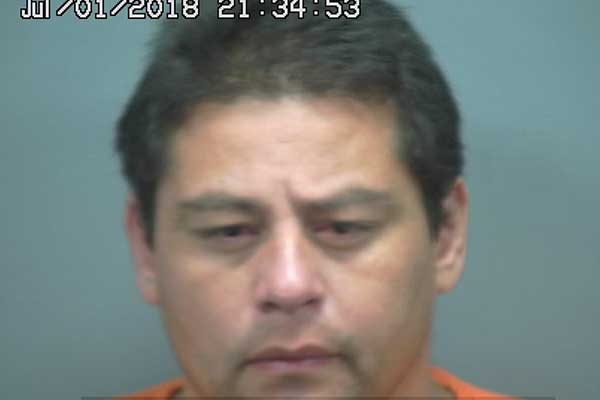 Ft Thomas – Authorities were dispatched to the Family Dollar store in Fort Thomas Sunday evening in reference to a man who was apparently causing a scene in the store.

The reporting party said that the man was intoxicated and and was refusing to leave the store. Officers were advised that the man was yelling and arguing with store employees and other customers. Two deputies and a Pima police officer responded to the scene. The first officer on the scene found the man, identified as Fabian Hinojos, standing by the register counter. When asked what had happened, Hinojos said that he wanted to make a purchase but felt that one of the store employees had rolled their eyes at him and treated him with disrespect. When asked if he had been asked to leave the store, he replied, “once.”

According to the police report, Hinojos took an aggressive stance toward the officer and refused to put his hand behind his back or obey any of the officer’s commands, so the officer drew his taser, which seemed to tone down Hinojos’ aggressive nature. While not being directly aggressive, however, Hinojos still would not comply with the officer’s direct order to leave the store. After further conversation, Hinojos reluctantly left the store and sat down on the corner of the building.

When another officer arrived, Hinojos was sitting on the ground outside the store and the first officer still had his taser pointed at him. Hinojos was still refusing to comply and being belligerent. He refused to cooperate with the second officer as well, and demanded to talk with a Sergeant. After being told that he could speak to a Sergeant later, Hinojos became a little more compliant and said that he wanted to tell his story.

Hinojos explained that his Jeep had just broken down and that he had had a ‘bad couple of days.’ He said that he went into the store to buy cigarettes, and thought that a female employee had rolled her eyes at him, which made him upset. Hinojos said that he felt he was being treated inappropriately and tried to talk to another store employee about it. He stated that he was not yelling but talking in a regular voice.

The store employees had a little different version of the story. According to them, Hinojos had come into the store to purchase cigarettes and had become angry when he felt that someone had rolled their eyes at him, asserting that he was being mistreated. The assistant manager said that Hinojos became more upset about the incident as he talked with him about it and began yelling and causing a disturbance. The manager said that there were other customers in the store and Hinojos’ behavior had disrupted business. Hinojos was asked to leave multiple times but refused, and continued yelling inside the store.

Hinojos was placed under arrest for disorderly conduct and trespassed from the store. Hinojos requested that his vehicle be left at the store with the keys in it and unlocked. The store employees agreed to the arrangement as long as the car was moved before the store closed for the day. Hinojos was allowed to call his wife to let her know about the location of the vehicle.

Hinojos complained that his civil rights were violated by being ordered out of the store and having a taser pointed at him. He asked how he could file a complaint and if he could speak to a Sergeant. While being transported to the jail, Hinojos complained that his shoulder and hand were hurting from being handcuffed. During the booking process Hinojos was asked if he had any injuries. He replied that he had no injuries other than hurt pride.