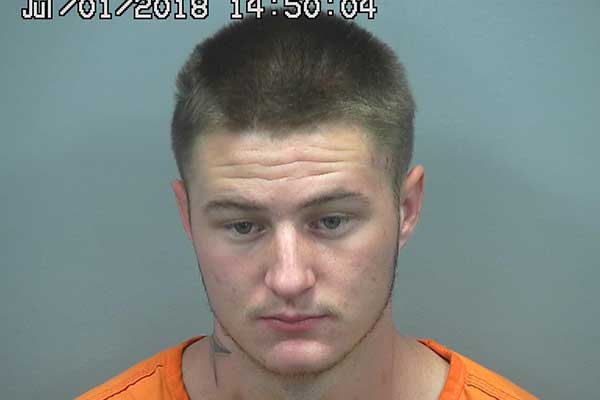 A man called police Sunday morning to report that he saw somebody on his security camera go into his house and take his camera down. The man had been out of town since Friday and had apparently logged into to his security system to check on his house. Authorities were told that a friend of the homeowner was on the scene and that the suspects were still in the house.

When authorities arrived, the homeowner’s friend said that he thought the suspect inside the house was Nathan Schaffner. The first officer on the scene noted that a screen to a window on the southwest corner of the house was out. When another deputy arrived they entered the home through the front door and found a young man laying on the couch just inside the door. He was ordered outside the house and handcuffed.

Another man was found inside a bedroom closet with the door shut. The man identified himself as Nathan Schaffner. He was handcuffed and escorted outside the home. After being read his Miranda rights, Schaffner was asked what he was doing at the residence. He replied that he was “just hanging out.”

When questioned, Schaffner apparently told authorities that he lived at the residence for about a month but had moved out a few weeks ago. He admitted that he did not currently live there and did not have permission to be in the home. Schaffner denied entering the house through a window, claiming that he and a juvenile had entered the house through an unlocked door.

Schaffner also said that he knew there was a security camera and told police that he had taken it down and put it in a box in the corner behind the kitchen table.

The juvenile told police that he and Schaffner had come to the residence about 9:00 am and that Schaffner claimed that it was his residence. He said they went inside to sleep for a while. The young man said that he did not know he was not allowed there, had no intentions of taking anything, and just wanted to sleep. He fell asleep on the couch by the front door.

According to the police report, the juvenile is on parole from Adobe Mountain, but his parole officer could not be reached. He was released to the custody of his mother.

The homeowner spoke to authorities by phone and confirmed that Schaffner had lived there for about a month but didn’t pay his rent so he made him move out.

Schaffner was booked into the Graham County Jail for trespassing in the 1st degree. The juvenile may also be charged with trespassing.