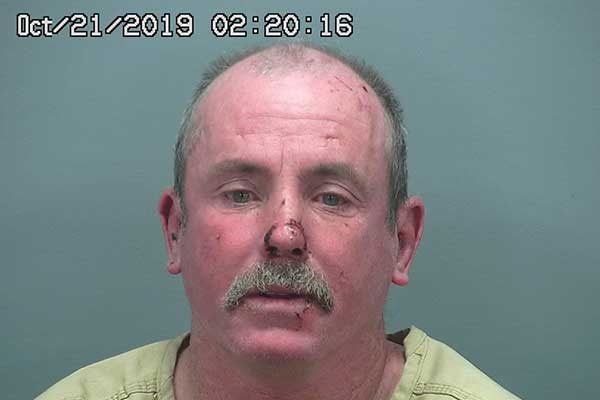 Safford Police officers responded to a call last Sunday about a fight in progress behind the marijuana dispensary on Thatcher Boulevard in Safford. The call came at approximately 1:30 p.m. An employee at the dispensary had called police to report the incident. When officers arrived they saw a white male walking from behind the dispensary with blood all over his face. The man was recognized by responding officers as Pete Criner.

There were several women standing in front of the building including the reporting party, who pointed to Criner, identifying him as the one who had assaulted another man with a chair. She said that Criner was jumped by several men behind the dispensary after he hit the man with the chair. According to the police report, Criner was heavily intoxicated and could barely stand. Officers set him against a patrol car to prevent him from falling down. An officer asked Criner what happened and he said that he got beat up.

An officer went to the back of the building and contacted the victim and his girlfriend. The victim said that Criner had come to where a group of people were sitting by some trees and started making advances toward the victim’s girlfriend and attempted to grab her. The victim said that he and Criner got into a verbal argument and when the victim turned his back to sit down, Criner came up behind him and hit him in the head with a chair. He said that he and several others then acted in self defense and began fighting with Criner. While speaking with the victim, the officer noted a metal chair near the group behind the building.

The victim showed the officer a large black and blue contusion on his head just behind his left ear. He said that he would like to aid in the prosecution of Criner.

Criner apparently had several contacts with police the week prior to the incident and other officers said that Criner had a severe alcohol problem and became violent after consuming alcohol.

An ambulance was called to the scene and assessed both Criner and the assault victim. Criner was transported to the Emergency Room for treatment. The victim declined medical treatment.

An officer went to the Emergency Room (ER) and was told by one of the doctors that this was Criner’s third visit to the ER that week. The doctor said that during the previous visits Criner had been offered alcohol rehab and admission to detox centers to help him with his alcohol addiction but each time, Criner refused. ER personnel said that Criner required medical treatment before being taken to jail. The officer was called back several hours later and advised that Criner was cleared to go to jail.

The officer told Criner that he was under arrest for assault. Criner then asked if he could go to an alcohol detox or rehab.

Criner was booked into the Graham County Jail for assault.