THATCHER – Thomas Walker, 59, was arrested and booked into the Graham County Jail on Sept. 14 for multiple assault charges after he allegedly attacked his wife with a metal baseball bat and choked an autistic child. 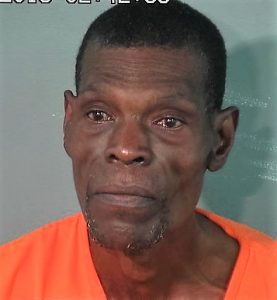 Contributed Photo/Courtesy GCSO:
Thomas Walker was booked into jail for allegedly striking his wife with a baseball and assaulting others, including an autistic juvenile.

According to a Thatcher Police report, authorities were dispatched to Revival Apartments at 565 N. College Ave. just before 7 p.m. regarding a man who was assaulting several people.

Upon arrival, the suspect, Walker, had left the scene but was later found hiding underneath a car on High School Avenue.

An officer came across Walker’s wife at the scene and immediately dispatched paramedics from Southwest Ambulance. She was then transported to the Mt. Graham Regional Medical Center (MGRMC) and was said to be in a great deal of pain.

While being treated at the hospital, the victim advised Walker had struck her with a metal bat and that she was in fear for her life. The metal baseball bat was later located in the roadway in front of the apartment.

Two other women occupants of the apartment gave statements to police. The first occupant claimed Walker smokes “white” daily, which in the Gila Valley is drug slang for either cocaine or methamphetamine. She also said she witnessed Walker strike his wife and choke an autistic juvenile and another juvenile, both of whom are 12 years old. The juveniles didn’t show any sign of injury, however, and both indicated they were OK.

The witness said Walker appeared to be upset over a situation involving his dog and the apartment manager. She said she herself between Walker and his wife, and, with the help of the second occupant, they managed to chase him out of the apartment.

The second occupant said Walker was asleep when he suddenly woke up yelling at his wife. She said she had glass in her foot from a glass that broke when Walker threw it, but other than that was fine. The officer advised the women to attempt to receive an order of protection and gave them a victim’s rights form.

Walker, who complained of injury and was apparently hallucinating when first apprehended, was also taken to MGRMC to be medically cleared. Afterward, he was transported to the jail and booked on charges of aggravated assault, aggravated assault with a deadly weapon or dangerous instrument, assault and disorderly conduct – all under the domestic violence statute.

While at the jail, Walker allegedly said he didn’t remember the assault or the people involved, including his wife and the other residents of the apartment where he lives.