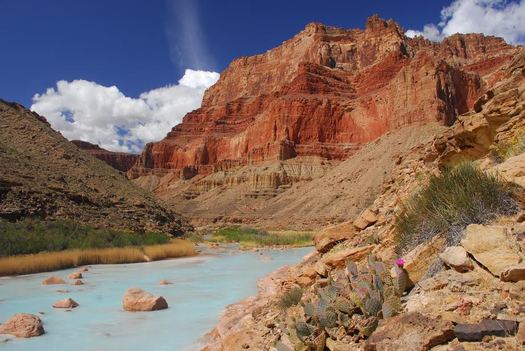 The watershed for the Grand Canyon would be protected under a proposed Greater Grand Canyon National Monument. (Thomas O’Keefe)
PHOENIX – American voters overwhelmingly support creating a new national monument on the outskirts of the Grand Canyon, according to a new poll.

Two polling firms – one Democratic, one Republican – polled 800 voters. Ninety-three percent agreed that the Grand Canyon is a national treasure for all Americans, not just people who live nearby. Nearly half said more needs to be done to protect the area, and 82 percent supported establishing a Greater Grand Canyon Heritage National Monument on 1.7 million acres near the north and south rims.

“It really is a rarity in today’s polarized world to ever see any issue reach 82 percent,” he said. “And even then, after a very balanced set of arguments, you still have nearly seven in 10 voters favoring it.”

The poll also found that, by a 35-point margin, voters would favor a presidential candidate who supports creating the monument.

Carletta Tilousi, a council member with the Havasupai Tribe, said her people have their own reasons for favoring a new monument. They’re afraid their water and air will be fouled by uranium mining if the current 20-year ban isn’t made permanent.

“The Grand Canyon is a sacred place for all humans and animals,” she said. “For this reason, we need to do whatever it takes to protect our natural wonder of the world.”

“There’s a lot of words to describe the Grand Canyon: iconic, majestic, spiritual, sacred, cultural, historic, special, a living legacy of the past and the present,” he said, “and all these are true.”

The legislation also would protect existing uses, including private property and grazing rights, existing mining claims and hunting. The bill made its debut last fall but hasn’t received a vote. President Obama has the power to declare the national monument by executive order, and Grijalva said he’s confident the administration will take action this year.

The poll results are online at grandcanyontrust.org.