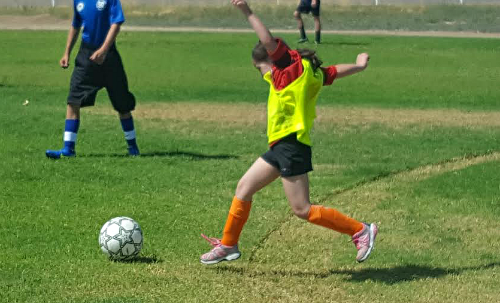 THATCHER – It doesn’t matter who wins or loses, what matters is the experience.

Saturday, the team played its first game at the soccer fields in Thatcher. The team warmed up, exercised and then played with another team, however, the rules of the game were just a little different. 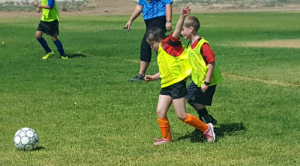 The VIP team consists of seven players so far, ages 5 to 31. Baldwin said if more people register, the team would separate into two, with an older-player team and a younger-player team.

“We don’t see as many special needs people out in the community as much as they get older,” Baldwin said. “And I think if these kids get to know them now, in five to 10 years when they are adults they’ll be more visible and more open to disabled people being in our community. That’s always my hope.”

Anyone who would like to support the VIP team can do so by simply showing up to the games. Baldwin added that a sponsor banner would also work well to inform the community.

Contributed Photo/Courtesy Hannah Keir: The VIP team in their red uniforms pose for their first game alongside their co-players, the Blueberries.