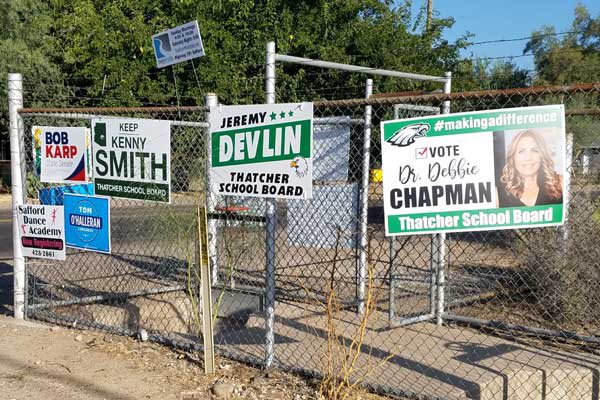 Political signs of candidates for both parties have been the target of vandalism over the past few weeks. - David Bell Photo/GIla Valley Central

SAFFORD — With less than 10 days to go before early voting starts, the political season is starting to heat up.

Locally, that political fervor is resulting in criminal damage.

Nick Nordgran-Tellez, Democratic candidate for Graham County Supervisor in Dist. 1, said one of his campaign signs had been stolen. The sign was on the Democratic Party headquarters on U.S. Highway 70, and the Sept. 14 theft was witnessed by party volunteers in the building, who said the man who took it and a Biden/Harris sign used a profane word to describe Nordgran-Tellez as he fled the scene.

“(T)hankfully no one was harmed other than having to deal with the perpetrator’s hate speech toward me and my campaign sign,” Nordgran-Tellez said on social media.

Republicans aren’t immune to sign theft either, as one week later Safford Police took a report that several Trump/Pence signs were removed from the area of 14th Avenue and Relation Street.

Police reported there were several shoe prints in the ground around where the signs formerly stood and photos were taken as evidence.

No arrests were made in either instance.