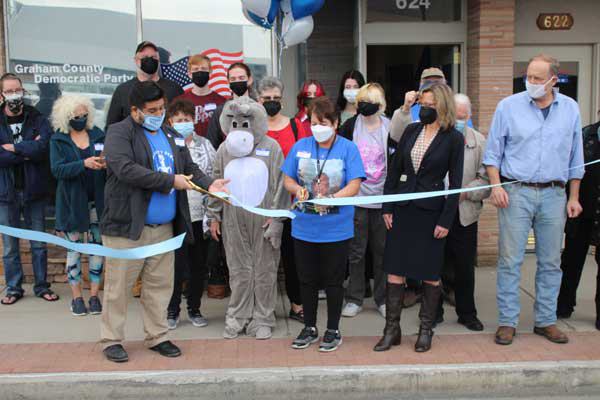 SAFFORD — The Graham County Democratic Party welcomed the public to its new headquarters on Safford’s 5th Avenue with an open house and Chamber of Commerce ribbon-cutting Monday.

“It’s almost triple the size of Little Blue (the party’s previous headquarters on U.S. Highway 70), so we get a lot more people in there, a lot more work space,” said Nick Nordgran-Tellez, Graham County Democratic party chairman. “And it’s Downtown, so it’s easy to run over to the Post Office if we need to.”

Two candidates were on-hand to help break in the new office — Kirsten Engel, a former member of the state House and a University of Arizona Law professor running for the new Congressional Dist. 6 that includes Graham and Greenlee counties, and Bob McWhirter, a former Maricopa County public defender who is running for Arizona Attorney General.

“You win races from the bottom up, and the outside in, not the top down. And Graham County is as important as any other place, and every single voter matters just as much as every other voter,” McWhirter said.

The new party headquarters is located at 624 S. 5th Ave. in Safford.