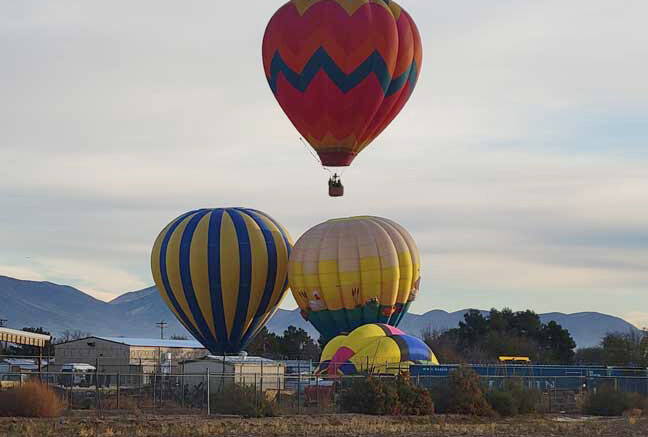 The Sun Dog, piloted by Thayne Peterson, lifts off while the Concho, left, the No Worries and the High Def finish inflating during the one day of flying at the 2021-22 Gila Valley Balloon Extravaganza. - David Bell Photo/Gila Valley Central

SAFFORD — The Gila Valley Balloon Extravaganza is not dead.

That’s according to Susan and Greg Lindsey, owners of AZ Air Ventures.

In a message to Gila Valley Central, the Lindseys said they are planning a third Balloon Extravaganza for the New Year’s holiday.

“We’ve done this for a number of years. We plan to continue to do it,” Greg said.

On Thursday, the Graham County Chamber of Commerce announced the cancellation of the event due to a nearly $28,000 loss from the 2021-22 event.

“We are disappointed by the last-minute notice of this, but our crew met last night and they all want to help the pilots return to the Gila Valley for the Extravaganza,” Susan said.

To keep the event going, the Lindseys said they are now seeking sponsorships to cover the cost of hotel rooms for the balloon pilots, and to pay for propane to fly the balloons and be used during the balloon glows in the evening.

“The Pinetop/Lakeside event sells out their local hotels three months before their event. They draw people from all over Arizona. The Gila Valley community has an opportunity to create a community event like a New Year’s Block Party and include balloons as one of the attractions, but it needs to be something the local municipalities want to do. We want to help by having balloon be part of an event like this,” Susan said.

The 2021-22 Balloon Extravaganza attracted about 20 balloons; however, flying was limited to just the first day of the event due to bad weather.