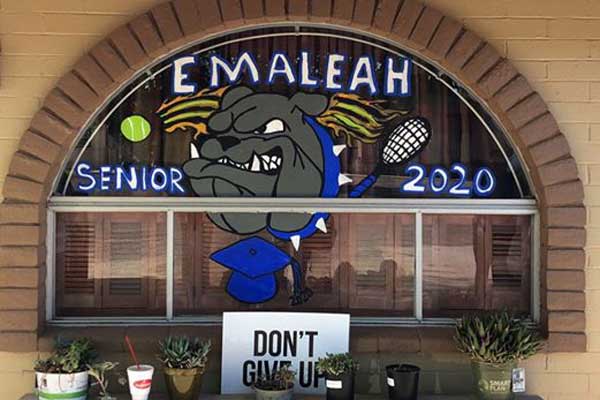 SAFFORD – Safford’s Anthony Vidales wanted to do something special for his younger cousin, a Safford High School student who, like others in Graham and Greenlee counties, won’t be dressing in cap or gown for a traditional graduation ceremony this May.

“I told him, ‘Hey, maybe I could paint a picture on your window, put your name on it, if you’re cool with that.’ And he was like, ‘Yeah. That would be awesome.’ I just painted a bulldog because he goes to Safford High School,” Vidales said.

Other families, seeing the window mural, wanted something similar for their seniors, and the result has been a series celebrating the graduates of Safford and Morenci high schools.

“I didn’t realize I was going to be doing something special for the senior class, but now I am. And, honestly, it’s pretty cool; it’s awesome,” he said.

Vidales holds a degree in media arts and animation, but he currently works as the sports coordinator for the community center in Morenci. He sees these windows as a first step into the art career he’s seeking. And it’s already paying off – he’s been commissioned to paint a mural for Canyonlands and will start that work on Monday.

Most of the referrals thus far have come via word of mouth, but he said he’s starting to be contacted through his Facebook page, which he said is the best way to reach him.

The average cost for a senior window is about $40, but cost depends on the window’s size. He also said he’s happy to paint for seniors of any of the area’s high schools.