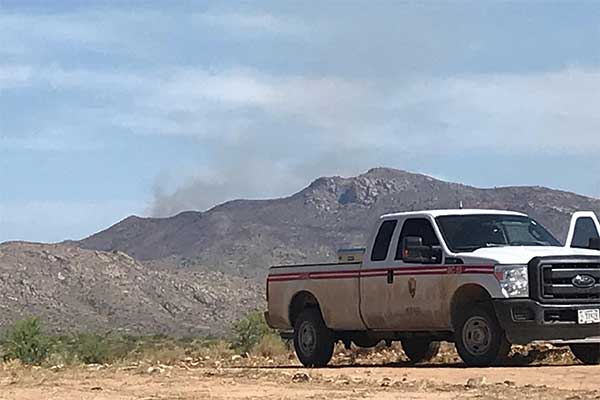 The Jackson fire was ignited by lightning the evening of Saturday July 11 near Jackson Peak in the Santa Theresa wilderness on Bureau of Land Management lands northwest of Safford, Arizona. The fire burns in very steep and rocky terrain composed of thick brushy fuels and grass.  Due to increasing complexity, a decision was made to call out the Southeast Zone Type 3 Incident Management Team to manage the fire. Command of the fire was transferred to the incident management team on July 13 at 6 p.m.

An infrared flight surveyed the fire Monday and determined the fire had burned 939 acres. It was moving to the northeast towards San Carlos Apache Reservation lands.   Due to the difficulty of the terrain, Monday’s effort was to initiate point protection for local structures and residences and to scout to identify defensible terrain barriers around the fire. Single engine air tankers were employed to slow the fire’s spread.

Two crews and a fire use module are currently assigned to the fire, with another hotshot crew arriving Tuesday. They will be supported by two helicopters and two engines. Air tankers will be available as needed. Additional resources have been ordered. Crews today will again scout and look for opportunities to engage the fire in accessible terrain and continue point protection around structures and residences. The fire is being managed with a full suppression strategy.

Temporary Flight Restrictions: A temporaryflight restriction has been placed over the Jackson fire area.