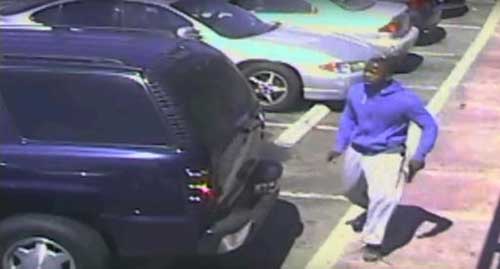 LOS ANGELES (AP) — Los Angeles police released surveillance video Tuesday showing an 18-year-old black suspect running from police while holding what appears to be a gun in his left hand just before he was fatally shot by officers in a police killing that has generated widespread protests.

The footage shows a man wearing sweat pants and sweat shirt crouching behind an SUV and pulling a handgun from his waistband. He then tucks the gun back into his waistband and runs around the corner of a strip mall as officers run after him.

Beck said Snell had a fully loaded semi-automatic handgun in one hand and turned toward officers when they fired Saturday. Protesters had demanded the release of the video.

“While the Los Angeles Police Department has a long standing practice of not releasing video evidence pending administrative and criminal investigations, the Chief is exercising his discretion to release video in the interest of public safety,” police said in a statement released at the same time as the video.

The video was made public just as Black Lives Matter organizers gathered Tuesday morning to protest Snell’s killing at a meeting of the Los Angeles Police Commission. The board of civilian overseers convened at midmorning and was later called off after demonstrators interrupted speakers and shouted for Beck’s resignation.

Protester Melina Abdullah accused police of selectively releasing a portion of video to justify the shooting and “posthumously assassinate the character of our brother Carnell Snell.”

The 45-second clip is the only surveillance footage that has emerged connected to the shooting, though detectives are searching for more, according to Officer Sal Ramirez, a police spokesman. He declined comment on when Snell was shot after disappearing around the corner where the shooting occurred.

Commission president Matt Johnson said releasing the video was in the public’s best interest, but warned it was too early to determine whether the shooting was justified or not.

“No matter what the circumstances, these events are tragic for the loved ones of the deceased, the friends and community members,” Johnson said. “While it’s certainly not the same as losing a loved one, these incidents are also tragic for the individual officers involved. It’s no one’s desire to take another man’s life.”

Officers tried to pull over a car Snell was in because it had temporary paper license plates that did not match the year of the vehicle. Beck said that was a possible indication to officers of a stolen car and something commonly seen in vehicles used by criminals for drive-by shootings.

Snell, seated in the car’s back seat, looked at officers and then ducked down “as if to hide from them,” Beck said.

When officers tried to pull the car over, Snell jumped out holding his waistband and the foot pursuit began, Beck said.

After police chased Snell for several hundred yards, Snell took a gun from his waistband and turned in the direction of the pursuing officers, prompting the shooting, Beck said.

The chief also addressed the fatal shooting over the weekend of an unidentified Hispanic man. Beck said the man pointed a replica that looked like a real gun at police and officers opened fire because they feared for their lives.

The shootings come amid heightened tensions over police actions involving black people and other minorities across the country.

Snell was the third black man in five days to die in confrontations with police in Southern California.

Last Tuesday, Alfred Olango was fatally shot by an officer in the San Diego suburb of El Cajon when Olango took a “shooting stance” and pointed at an officer with what turned out to be a 4-inch vape pen — an electronic cigarette device.

On Friday, Reginald Thomas died after being shot with a Taser by police in Pasadena. He was armed with a knife and was described by family members as mentally ill.

Meanwhile, the family of a black man killed by police in Sacramento in July demanded murder charges Monday against two officers heard on a dash-cam video talking about trying to hit the man with their police cruiser before he was shot 14 times.