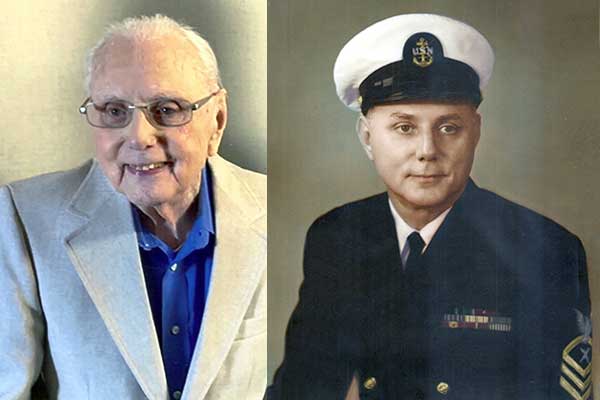 Joseph Sedgeman Jr. was born in Morristown, New Jersey October 14, 1924. His Mom’s name was Frances (Johnston) Sedgeman and his Dad’s name was Joseph Sedgeman. His Mom and Dad were married in 1876. His Mom was a nurse at the Morristown Memorial Hospital and his Dad started out as a short order cook. Later, his Dad got a job driving a truck for Morristown Lumber and Coal Company. Joseph and Frances had 4 children: William, Richard, Joseph and Edith.

As a child Joseph loved playing baseball, he was the pitcher for his team. He also liked hiking and fishing.  The family moved to Cedar Knolls, New Jersey, where Joseph went to Cedar Knolls Grammar School. They then moved to Dover, New Jersey where he attended North Side Grammar School. He also, attended Dover High School for 2 years and then his parents moved to Wharton, New Jersey where he graduated from Wharton High School. On June 15th, 1942 he got a job as Tack Welder at Dover Boiler & Plate Fabricators.

When WWII started, Joseph was 18 years old and the Army was going to draft him, but before they could draft him, he enlisted in the US Navy December 9, 1942. He went to boot camp Naval Training Center at Great Lakes in Michigan. Joseph was then transferred to the University of Chicago Illinois Radio School for 8 months. He was on the “Shellfish” Submarine in New London Connecticut, where he had to sleep on a hammock resting over a torpedo. Then was transferred to Barnbridge Island, Treasure Island Advanced Receiving Radio School in Seattle Washington, where he graduated third class radioman and became good at sending and recovering codes. After being in Seattle for 6 months, he then went to California, where he stayed for 3 weeks waiting to get transferred to Oahu Hawaii U.S. Navy radio station; he received Morse code for 6 months. Then transferred to Guam, Marianas and went to Guam on a troop ship, second wave. The ship couldn’t dock, so they had to take small motorboats onto shore, where they set up tents where he continued to receive and send Morse code. World War II ended Sept 2, 1945, Joseph was sent back to Wahiawa, Oahu Hawaii, and then back to Washington. The Navy approached him and said they needed a radioman on the aircraft Carrier Hornet. He spent the rest of the war on the carrier.

Joseph re-enlisted and was transferred to Puerto Rico, where he did a 4 year tour. Then he was transferred to Cheltenham, Maryland. He was at Skaggs Island, where he took a test and made rank of Chief Petty Officer, CTC E7, before accepting the honor. Joe had to get initiated and the men made him eat his food out of a wooden trough that was nailed to two pieces of wood to form a “V”. The food was made up of a little bit of everything mixed together which he had to eat with his hands. Joe was trying to stuff the left over’s in his pockets. The rest of day was spent shining everyone’s shoes.

The 8 months Joe was in Chicago, he was able to take dancing lessons at the Arthur Murry Dance Studio. He learned how to Jitter Bug, Waltz, Fox Trot, and the Polka. On Friday night, the USO bought ladies in from 6 P.M. to 12:00 P.M where the men could dance the night away, but no one could take the women out of the dance hall. Being a sailor in a white uniform and black neckerchief, he was quite the lady’s man as he was leaving the dance hall; his eyes caught a young, beautiful lady stepping off the bus, named Elvera Bacho. He approached her and asked if she wanted to get something to eat. At first she said no but after asking her several times, she finally gave in. Elvera worked for the FBI as a secretary.  They dated 6 months, when Joseph got down on one knee and proposed to her and they got married January 27, 1951. He was then transferred to US Navy Alaska, after a year he was transferred back Treasure Island California. In 1954 Joe and Elvera were on their way to Japan, where their first son Joseph Paul Sedgeman was born January 26, 1954.

After serving 3 years at U.S. Naval Security Group Activity Kamiseya, Japan, Joseph was transferred to Guam, where their second son Brian Michael was born November 20, 1958. Every 3 years they were transferred to another Navel base. In 1960, they were sent to the Naval Reserve Manpower Center Bainbridge, Maryland, this was during the Cuban Missle Crisis, and Joseph was on the USS Oxford. Then was sent to Morocco, where Joe won a motorcycle and it was stolen before he even got to ride it!  After 3 years, they went back to Japan. 1970 they returned to Treasure Island San Francisco California where he received an Honorable discharge after 30 years of service. During his career Joseph received 7 Good Conduct Medal Awards, Good Conduct, American Theater, Pacific Operation, Victor WW11, Naval Unit Accommodation, 2 Korean Service and also two National Defense Service Medals.

Joseph and his family moved to Bisbee Arizona in 1970. He was hired as a Security Guard for Phelps Dodge Copper Mine in Morenci Arizona. The family stayed in Bisbee for 2 years while Joseph stayed in the Dorms in Morenci.

In 1972 they got a house in Stargo on Elm Street, where Joseph Paul went to EAC and Brian graduated from Morenci High then went to EAC.  In 1980 they bought a house in Sierra Vista, Elvera moved down there while Joseph stayed in Morenci and would go down on weekends in his little white datsun. They loved to go to Las Vegas on his days off. If they got tired, they would pull off in rest area and sleep, and then continue the drive to or from Las Vegas.  After 10 years, Joseph retired from the company in 1982 and they made their home in Sierra Vista for 10 years. During this time, Elvera was diagnosed with Breast cancer.  Elvera went into remission and had a clean bill of health. They decided since they loved Las Vegas so much…why not move up there…so they did. They bought a Condo in 1992. That was their favorite place to be; they would go down to Arizona Charlies almost every day and have their “brunch”. The Casino staff knew them by first name! Whenever family would go up to visit them, they would show them a great time in Vegas! Las Vegas had lots of entertainment to see from downtown Las Vegas to Las Vegas Strip. There was nothing they didn’t know about Vegas. We always teased Elvera, she was our back-seat driver!

In 2003 Joseph had to have a pacemaker and Elvera’s cancer had come back. They decided it would be best to sell their place in Vegas, and move them to Thatcher Arizona in 2004, where they lived with their son, Joseph Paul, and his family. Still loving to travel to the casinos, they would go to Apache Gold and take trips to Laughlin.  Elvera was in remission the first year, and then her cancer came back. She fought a hard battle with Chemo never giving up hope. She passed away January 12, 2009.

Joseph loved going to the casino every chance he got and played his favorite penny machine, Lady Bugs, or his video poker, Deuces Wild, still waiting for the Royal Flush. When they first moved Thatcher, he liked to take walks around the neighborhood and see who he could talk too. He also liked to draw and loved to read.  He could tell you anything you wanted to know about the Kardashians!! He jokes about his girlfriends…Jennifer Aniston and Jennifer Lopez!!! Joseph loved baseball and his favorite team was the New York Yankees.  A-Rod (Alex Rodriguez) was his favorite player and he could tell you everything about him. His favorite football team was the Pittsburg Steelers. Joseph also loved our puppies, Rocky and Molly. Rocky and Joseph had the same birthday and they were best buddies.

Joseph was preceded in death by his parents, Joseph and Frances Sedgeman, his two brothers, William and Richard (Dick) and one sister Edith, along with his son Joseph Paul.

Joseph was a loving Dad, Grandpa, and Great Grandpa. He loved his family and visiting with everyone while reminiscing about his Navy days. He had the sweetest smile that everyone loved. He will truly be missed and loved by all of us. He will be forever in our hearts.