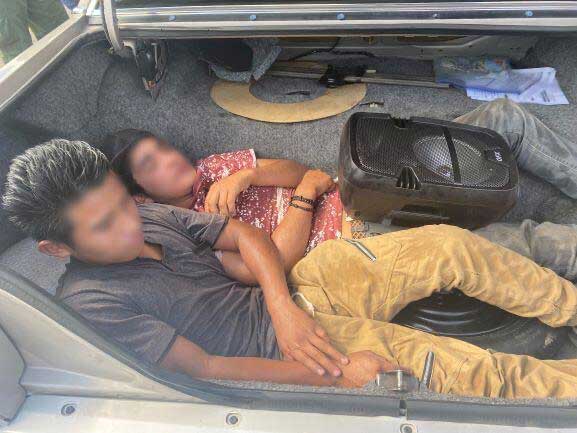 At approximately 6 p.m, with temperatures well over 100 degrees, Tucson Sector agents referred a Crown Victoria sedan to a secondary inspection. Agents subsequently discovered a Guatemalan man, 20, and a Mexican man, 19, both illegally present in the United States, concealed in the vehicle’s trunk.

The driver was arrested and ultimately released for her role in the smuggling incident.

Both illegal border crossers were processed for immigration violations and expelled from the country under Title 42 authority.

Although both men were found in good health, U.S. Border Patrol officials warn that smuggling people in a trunk can be deadly, especially during the summer months.

“With temperatures surpassing 100 degrees, placing someone in a trunk is not only inhumane, but potentially deadly,” stated Tucson Sector Chief Roy Villareal. “The swift actions of highly trained agents prevented such an outcome today.”

For more details regarding this media release or to schedule a remote interview via LiveU, please contact the Tucson Sector Border Patrol Public Affairs Office at tca-pao@cbp.dhs.gov or by phone at 520-748-3210.