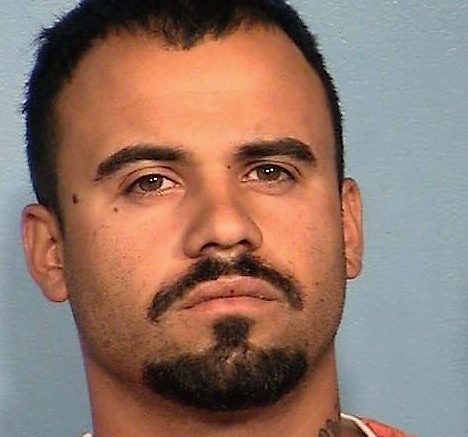 Contributed Photo/Courtesy GCSO: Phillip Michael Diaz was found with 5.7 grams of heroin for sale after his girlfriend was caught shoplifting batteries from Dollar General.

SAFFORD – A man was found to have 5.7 grams of heroin for sale after his girlfriend was caught shoplifting batteries, Monday.

Officers were dispatched to Dollar General at 1640 W. Thatcher Blvd. at about 10:04 p.m. regarding a shoplifter who was still inside the store.

Upon arrival, an officer located a woman who matched the description of the shoplifter standing outside of the store next to a Pontiac Solstice automobile.

The woman, later identified as Taylar Dawn Moreno, 27, of Safford, said she hadn’t stolen anything and that she just went to her car to get her wallet. The officer shone his flashlight into the vehicle and located a package of unopened batteries in an open purse on the vehicle’s floorboard.

Diaz, who was at the store with Moreno, was also questioned and denied taking any merchandise. He wasn’t found with any stolen goods and was advised Moreno would receive a citation for shoplifting.

At that time, Moreno’s mother, who is the owner of the Pontiac, arrived and began taking items out of the car. The officer instructed her to stop and said he was going to inventory the contents of the vehicle because stolen items were already discovered inside and he couldn’t be certain more stolen goods were not hidden as well. The vehicle owner protested, but eventually relented upon advisement she would be arrested if she didn’t let the officer perform his job.

During a search of the car, the officer located a plastic bag containing 5.7 grams of heroin in a compartment between the two front seats. The officer also found a digital scale under the passenger floor mat and a glass bong with apparent methamphetamine residue in the driver’s side of the car.

Diaz allegedly admitted to driving the car and possession of the heroin and drug paraphernalia. He told the officer that he was “roughing it out” and that he was trying to make some money by selling heroin, according to the report.

Diaz was then arrested and booked into the jail on the drug charges. Moreno was given a citation for shoplifting and was released at the scene.