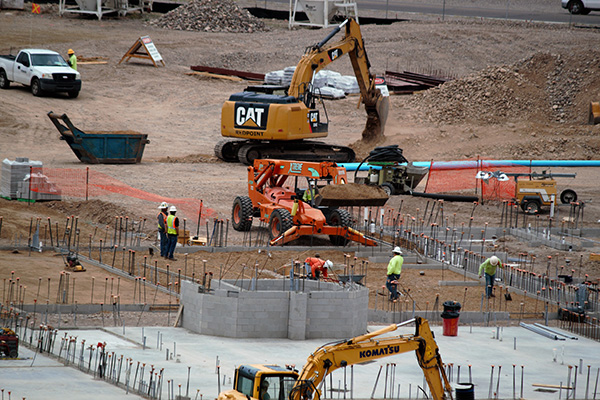 The hiring fair, which was held to help build up the construction workforce for the new Graham County Detention Facility across the Gila River, was held at the Graham County General Services Building from 9 a.m. to 2 p.m. Okland Construction, of Tempe, is the facility’s general contractor. 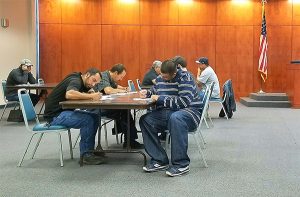 According to Kimberly Termain of Arizona@Work, the room was packed with those seeking jobs as soon as the doors were opened. The fair saw a total of 82 new job seekers on top of more than 60 resumes that were previously processed.

Jordan Taylor, a project engineer with Okland, said he was pleased with the turnout.

“It’s been pretty good,” Taylor said. “There’s been a lot of people. I got here this morning just before nine o’clock and there was a line of people going through the foyer right there.”

In addition to Okland seeking laborers, the company also assisted in taking resume’s for a variety of its subcontractors, which are looking for skilled trade workers as well as general laborers. A few subcontractors were on site as well, including HACI Mechanical, Nichols Electric and Division 3 Structures, which was looking for concrete workers.

Frank Swisher of HACI Mechanical said while there were plenty of concrete workers, there weren’t a lot of skilled trade workers with knowledge of plumbing or commercial heating, ventilation and air conditioning (HVAC) that they were looking for. He said there were a few applicants with enough knowledge to give them a start and help them learn on the job, however.

“Air conditioning in these detention centers is fairly intricate,” Swisher said. “I can’t just put anybody up on it. It’s just a little more complicated than your average warehouse or residential (job), but we’re trying.” 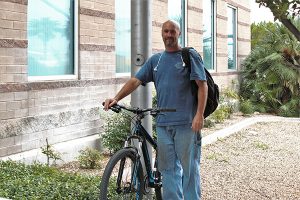 Jon Johnson Photo/Gila Valley Central: Ryan Walker applied for a job during the fair and hopes to land a more permanent position working in refrigeration.

Job seeker Ryan Walker submitted an application at the event and told Gila Valley Central that he hopes to get on with a subcontractor where he can work with refrigeration.

“There’s not a lot of work out there,” Walker said. “I’m working right now, but it’s just temporary. I’m looking for something more permanent.”

The county broke ground on the $22.5 million facility in June. Taxes collected through a half-cent sales tax that began July 1, 2015 will pay for the jail’s construction. The tax is expected to be in effect until July 1, 2040. The facility is scheduled to be completed by October, 2017.

The new adult detention facility will have multiple cell levels that will initially hold up to 225 inmates. Additionally, it will house the Sheriff’s Office and all its administration, along with other necessities of a jail, including laundry, kitchen and inmate educational facilities. Due to its placement just east of 8th Avenue and south of Airport Road, the facility can expand to house more inmates if necessary.