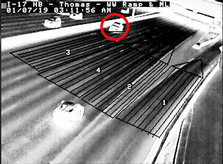 PHOENIX – The Arizona Department of Transportation’s thermal camera-based wrong-way vehicle detection system along Interstate 17 in Phoenix alerted authorities and other motorists to a pickup truck being driven the wrong-way on the freeway early Monday morning.

No one was hurt as the vehicle traveled southbound on northbound I-17, primarily in the HOV lane, from Camelback Road until just before the “Stack” interchange with Interstate 10, where Arizona Department of Public Safety troopers took the driver into custody.

As designed, a thermal camera immediately detected the truck entering the northbound I-17 exit ramp at Camelback Road shortly after 3 a.m. and alerted the Arizona Department of Transportation’s traffic operations center staff as well as the AZDPS dispatch center. At the same time, ADOT activated wrong-way vehicle warnings on overhead freeway signs in the area.

Thermal cameras on the I-17 mainline at Indian School, Thomas and McDowell roads provided updates, with video, to ADOT and AZDPS as the vehicle proceeded southbound in the northbound lanes.

DPS troopers who were dispatched right after the first detection caught up with the driver south of McDowell Road.

ADOT’s first-in-the-nation system, which includes 90 thermal cameras along 15 miles of I-17 between the I-10 Stack and the Loop 101 interchange in north Phoenix, has been operational for one year while engineers evaluate the performance of its components. Those include a computerized decision support system and specialized background-illuminated wrong-way signs that light up in an effort to get the attention of wrong-way drivers, who in many cases are severely impaired.

So far, the $4 million I-17 system has recorded detections of more than 45 wrong-way vehicles within the project’s boundaries. Nearly all of the drivers in those incidents either “self-corrected” and turned around on an off-ramp or drove on the frontage road without entering the mainline lanes of I-17.

The I-17 technology cannot prevent all wrong-way crashes from happening. The primary goal is reducing the risk of serious crashes by alerting AZDPS and ADOT to wrong-way vehicles much faster than waiting for 911 calls from other motorists. Faster detection is a key to giving law enforcement officers an improved chance of responding to a wrong-way vehicle. While technology holds promise for reducing the risk of serious crashes, it can’t prevent impaired drivers from getting behind the wheel.