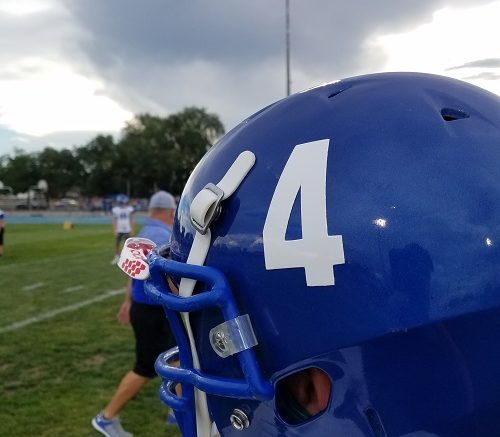 It was a defensive struggle for the entire first half as both teams exchanged turnovers and punts for 23 minutes. Snowflake took advantage of a Safford turnover with 1 minute remaining and David Brimhall capped of a 4 play drive with a 19 yard run, the 2 point conversion was good and the Lobos led 8-0 at the halftime.

The Bulldog defense stood strong in the 3rd quarter but eventually tired and gave up another Lobo run touchdown, this time from Brig Turley, the PAT attempt was blocked and Snowflake led 14-0.

The Lobos tacked on another Brimhall TD run in the 4th quarter to lead 22-0. Safford had one last chance when they got the football back with under a minute left. The Dogs put together their best drive of the night and capped it off with a 12 yard TD pass from Mason Duros to Jerick Arbizo as time expired. Justin Torrio added the PAT to make the final score 22-7.

The Eagles and Wildcats combined for nearly as many turnovers as points in this one. The two played to a 0-0 tie at halftime after neither team strung together a drive. Thatcher scored twice in the 3rd quarter on runs from Riley Morris and Q Turley and that was all the offense they needed. The Thatcher defense dominated the 4th quarter to hold on to the lead and the win

Next up: at Arizona Leadership Academy – Queen Creek

The Fort Thomas Apaches took the 3 and half hour drive to Sells to take on the Baboquivari Warriors and needed only half that time to come away with a convincing win. Fort Thomas used their balanced attack to chew up yards all night long.

Next up: vs Salome